Mother nature took an Ambien, passed out, woke up, and had no idea what was going on. The Mighty Pacific was puking all over Southcentral AK, but the snow was flying in West Anchorage and the Valley. The common snow locales of the ANC Hillside and Turnagain meanwhile, were merely getting side-sprayed in mist, accumulating only a precious few inches.
Mother Nature got it together, through a little hoar-frost sawdust on the mess to dry it up, and ushered that drunken jet stream back south so AK could go back to what it knows best this year: cold and snow less.
I guess the Valley was pretty desperate, so maybe it's good they got dumped on, but West Anchorage? Well, good thing for the new snow making equipment over at Kincaid, apparently it was the ticket to a free foot of all natural, organic, frozen water.

Undeterred by the lesser amounts of snow in Turnagain, a big crew (read 5) consisting of Mike C, Josh O, Cody, Nate and I rallied to the Tin Can trees. At the middle-elevation we found knee-deep, super dry, super light white stuff. Higher up looked wind schlammered with a few pockets of glory. We were happy to launch cliffs and ledges all day. The snow was slow, taking a few turns to get used to at first, but boosting confidence on the airs and steeper slopes. 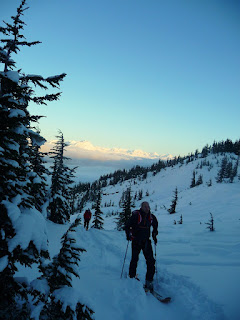 ﻿
Josh and I pointed our Subaru road show back to Soldotna while the rest of the boys headed back to the Big City. Josh and I were hoping to fly his Super Cub to the West Side and poke around in the Chigmits to assess the snow over there. Back at camp in Sterling, the thermometer read 20 degrees, 15 degrees warmer than Turnagain Pass. That never happens, but a thick fog over the Cen Pen was storing heat.
The next morning the fog was still holding thick and temps remained in the 20s. Stuck on the ground we waited, knowing we had only a few hours of daylight to complete the mission.
By 11 it was the fog was blowing out and I headed to the airport.
The fog did lift, and the temperatures dive bombed 20 degrees in maybe as many minutes. Water vapor crystallized mid-air, but we went airborn.
﻿
﻿

As we headed out toward the East Forelands to make the crossing, the Rag Tag was fighting a stiff 30kt north wind. We were rocking an airspeed of 48mph. The Rag Tag's normal cruising speed is 88mph. We started to get a visual of the Chigmits, and from what we could see, things did not look good. Little snow has fallen on this oft-soaked range, and the winds had worked much if it away.
We turned with the wind, accelerating to about 110mph, and headed toward the Tustumenas to fly around.

Quarter-turn ski take off, and landing, with video speed control.
Any trip to the West Side is subject to a lot of variables, so we had low expectations going in. The scenic flight was still nice. Riding in airplanes never gets old in a state like this.
With a few hours of light left on the table, I hopped on the skate skis and did a lap at TTA. I haven't skied the "TTA Lap of Pain" (a loop incorporating all the trails in a way that maximizes climbing) in over a year. Since I left, a few clicks of new trail have been added as well. Despite low single-digit temps, the snow had not yet fully cooled and turned to styrofoam, and was still skiing well, albeit, getting loud.
Sunday morning it was 18 below at camp, and 5 below in Turngain. If I had brought classic skis I would have been happy to ski the classic tracks set at TTA, but that wasn't the case. Josh was headed to ANC as well to invest in his own pair of skate skis, so we we decided to make the best of it and ski a couple laps at the Can.
﻿
Tracks and gapers were many, and the snow was even slower and colder than Friday. We skied one line through the trees that has somehow been largely missed, climbed back up, and were happy to GTFO and call it a successful weekend. 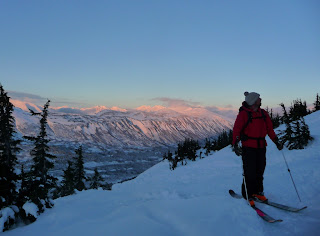 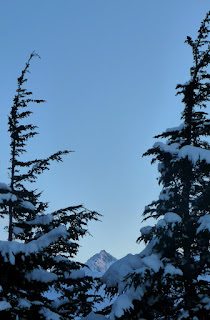 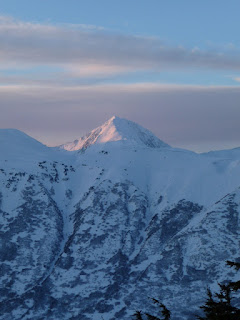