This will be the last post, ever.
I haven't given up on blogging or anything, but the Mayans forecasted the end of life as we know it this week.
Meanwhile, the Weather Service is predicting "Snow-mageddon" to descend upon Los Anchorage and its pseudo suburb, the Valley.
We'll see who's better at predicting the future I guess.
We finally saw the first real shot of snow this past weekend, though in quantities much less than advertised by one of the aforementioned forecasting services.
With temps finally above 0 on Saturday, I ventured out on my stud-equipped Trance and rode with Ethan from Lower Hillside up to the top of the Middle Fork Trail, riding snowy single track back down. I've heard many rave reviews of this trail by winter riders, and indeed it was a fun ride out. Too bad Chugach State Park is approximately 20 years behind the curve when it comes to the sport encompassing the mountain bicycle, and still believes the its participants seek an experience well-exemplified by this:
By the end of the ride snow was falling in earnest, and it looked like we might actually pick up some significant accumulation by morning.
That was foolish, and just wishful thinking.
Dan and I had intended to ski Alyeska, but with only half the predicted snow fall, we headed to the Tin Can trees instead.
We ended up punching in four laps there, plus an exit run back down the main skinner to the car that Dan described as: "perhaps the best that skinner has ever skied."
Very accurate.
As usual, despite Tin Can's reputation, except for two laps that we were shared with Ethan, Josh D, we had no other company that stuck around for more than 2.
The storm snow skied great, and rocks, stumps, etc were not a problem, but we did get almost everything steep we skied to let go about a foot deep, including one release that spanned about 50 yards wide. Propagation was minimal and the snow lacked energy. 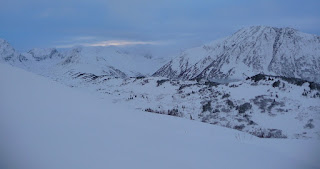 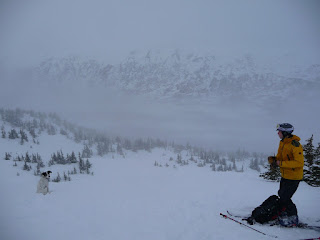 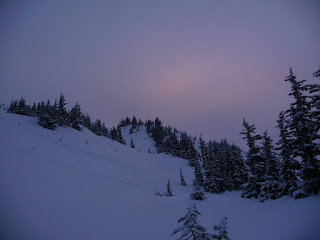 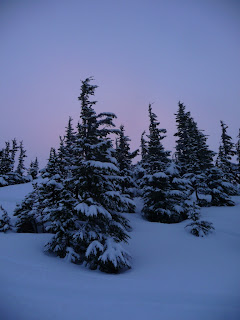 If the world is still turning in a week, I guess will post back here. Otherwise, enjoy the afterlife!
Posted by Dante at 11:40 PM

Just so you know, the Mayan apocalypse isn't coming until Dec. 21. You should have time for one more post before then.