These are the three things I do in the wintertime, and this weekend, they were all perfect.
Ideal conditions for these three activities at the same time is not necessarily a common occurrence: what makes one activity good doesn’t necessarily bode well for another.
Conditions were not mutually exclusive for the past few days though.
Cody and I started it off with a speedy rip on the trails of Lower Hillside on the bikes on Friday night.
As the fat-tire bikers like to brag, the trails are both more numerous, and often faster in the wintertime, and that is for sure right now.
It was all I could do to keep up with Cody as we hammered through the narrow winter single track favorites, and being a Friday evening, we saw very few others.
On Saturday, Cody, Aaron, and I rendezvoused with Lizzy at her ski chalet, and headed up the road.
We were apprehensive about what we would find, and had fairly low expectations.
The skies appeared to be thick and gray, though the forecast called for possible clearing.
We were more concerned with how the snow would have set up following the early week warm up 5 days prior. When we left the slopes the previous Sunday, snow quality could have best been described as “cream cheesy” down low, and wind effected up high. Temps had continued to climb on Monday, before cooling back off as the week progressed.
Since then, there had been a few light snowfall events, but nothing to write home about. I was fully expecting to find that the cream cheese would have become “crisp” with a melt crust, and higher up there would be wind crusts; all covered by a few inches of dust.
Instead, the snow down low transformed into a perfect consolidated powder, refreshed with a couple inches over top; and with no recent winds up high in the past week, there were several inches of fluffy snow now sitting atop a carvable base.
Better yet, we stayed above the clouds all day, yielding what was easily the second best conditions I’ve skied since the Thanksgiving weekend outings.
We recycled our skinner and lapped our chosen aspect until dusk. 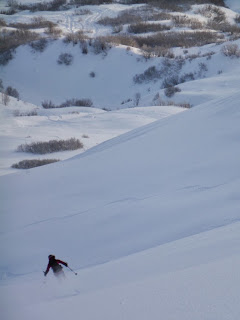 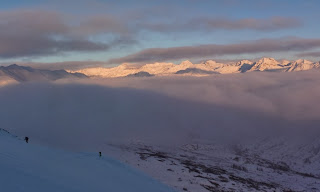 Sunday, light snow was falling from the Kenai to the Talkeetnas, and the vis window had closed on Hatcher.
Despite being on the recovery from a flu, Phil was game to do a relay race being held on Hillside. The Hickok Duathlon, a part of the Anchorage Cup series, is a dual-technique Nordic race, with a classic segment and a skate ski segment.
I think that technically a duathalon is defined as an event in which there are two sports and three segments, so that one sport is done twice, i.e., run-bike-run.
In this case, the course was an apx 7.5km classic ski, followed by an apx 7.5km skate ski.
Calling the event a biathlon might be confusing though, since the term “biathalon” seems to be refer exclusively to skiing and shooting.
Phil and I just called it “fun.”
Most nordic races in Anchorage are held at Kincaid, so the venue shift was welcome, and the fact that the course made use of the multi-use and classic-only trails really enhanced the character of the event.
I took the classic segment, and Phil took the skate. Conditions were optimal for both techniques, with temps in the low teens, and a steady snow that started to fall just before the first waves went out.
I had excellent kick - but not too much - with V30. My glide felt like it could have run further, and that was echoed by some other classic skiers. More than once, I found faster gliding by jumping out of the tracks and onto the corduroy.
I don’t remember too much about my time on the course. There were a couple high school-looking kids in my wave that disappeared fairly quick from the start, and one or two others closer to my age that I seemed to be in contention with for a little bit before one scooted by and the other dropped back from sight. After that, it was mostly smooth sailing, barring a few bottle necks when I hit groups of solo racers.
The course was awesome, and zipping through the narrow classic-only trails was exceptionally picturesque with the falling snow.
I fist bumped Phil in the tag zone, and he skated the next portion. We took third place in the men’s relay out of a small field of 8 mens teams. The event was actually well attended, but most competitors do the race solo and ski both techniques.


After, I clicked into my skates and headed from Service up to Spencer Loop. I think this was the first skate I had on Spencer in the daylight this year, as all my other skates there have been in the dark after work.
About an inch and half of cold dry snow had accumulated, and the cold flakes continued to fall gently.
Gliding along, carving through Spencer’s many twists, watching the fresh snow spray from my edges, it was hard to not just be happy that in a winter that has so far been scare on days that feel like winter, everything that I had seen or felt in the past few days, definitively was just that: perfect winter.
Posted by Dante at 11:08 PM