Fish Out of Water

Observation 1: Breathing is great.
Observation 2: It’s impossible to do underwater.
Observation 3: I guess I knew that, but sometimes I need to be reminded.
It’s fall. It sucks. It’s wet when it’s not sunny; it’s not warm when it is sunny; but it’s still too warm to snow.
Get over it, find something else to do…like, hike, run…swim?
Observation 4: Hang on, back to that last one, I miss swimming: swimming in lakes, swimming in spring-fed rivers, and even swimming back and forth in a 25-yard chlorinated pool. I did all the above growing up, including about 10 years on a swim team, and later in college as an off-season activity.
Jumping back in the pool, if you will, got me thinking though.
I have had, and currently have, some athlete friends, who also swim from time to time, often as part of triathlon training, and most of them seem to hate it.
Most of these people are really good athletes though, and I’m sure they’re quite capable swimmers.
So what gives, why does it seem to suck so much for them?
I can’t say I know for sure, but maybe my first re-soak in 7 years let me see it through their goggles, at least for a few minutes.
The schedule
Unlike going for a bike ride, or a run, or something of the like, swimming in a pool means you have to conform to someone else’s schedule, and also go someplace specific. If you’re lucky, you live somewhere with a couple public pools, and one of them is conveniently located nearby. Even still, public pools serve multiple purposes throughout any given day, and they are not open 24/7 for your disposal. You might get a spendy membership to a private health club with a pool, then you can swim pretty much whenever you want, although these pools typically have a schedule as well.
Public pools are the most restrictive though, and only have a couple hours a day designated to lap swimming. More often than not, the windows are short and they’re enforced. If you don’t arrive on time, you may not complete a work out. In college, we had a great pool, but I was thrown out at least once with only a couple more laps left because a swim class was about to start.
And about that conveniently located part, well, even if there is a pool nearby, and it has hours that work for you, not all pool facilities are created equally. Some are just perfect, but the list of undesirable features are many: too hot, too cold, too chlorinated, stuff growing on the walls, too busy. The pool that best fits a schedule, doesn’t always fit one's personal standards. 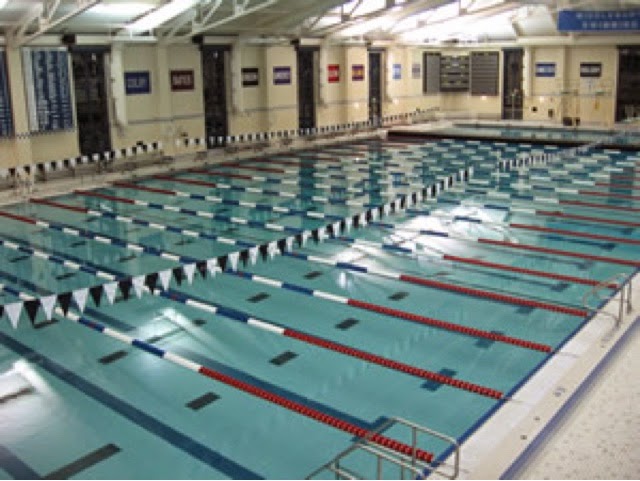 I spent a lot of early mornings in Middlebury College's mega pool.

The locker room.
That last bit is a nice segway into what is easily the worst part of swimming: the locker room. Aside from their ability to be havens for odd body odors, foot fungi, and petty larceny, they are full of potential awkward encounters.
There are two groups of people that seem to feel overly comfortable in pool locker rooms: old people and little kids. Everyone else in between seems to have gotten the memo that this is a place to spend as little time as possible.
Unfortunately, the latter groups really have an outsized way of making the place uncomfortable for everyone else. On my first foray back into the water, I opened the locker room door and was immediately greeted to the sights and sounds of a dozen or more screaming little kids, towel whipping each other and causing whatever mayhem they felt like. I bee-lined to the far end to what appeared to be a quiet row of lockers, only to round the corner and be greeted by the sight of some old guys, you know, just hanging out, shooting the breeze. I’m going to re-emphasize the words “hanging” and “out.” Seriously, I know there’s a bench, but it’s not a park bench.
Head down, clothes off, suit on, let’s go.
The rules
OK, so now it’s on to the pool, which, if you’re not paying to swim at a club, is probably busy due to the aforementioned schedule thing. You see, there are the rules, and then there are “the rules.”
The first set are probably fairly obvious, and may even be posted in large block print: No diving, no running, no glass, no inverted aerials. OK, I dunno if that last one is posted.
So you look at the pool, and every lane is full. In one lane, the captain of the swim team is doing his third work out of the day (this one is just his personal work out, NBD), in another lane, grandma is doing aquarobics.
Obviously, you’re not on the swim team, but you’re pretty sure you don’t want an invite to the bridge club either.
Some pools have fairly clear designations posted in the rules, where say lane 1 is the slow lane, and each successive lane is “faster.” Swimmers are to sort themselves out.
I could see no such order when I walked in, but this isn’t my first time to the pool, so I asked the cute life guard.
She giggled (great, no please, that’s encouraging) and shook her head, saying I should jump into whatever lane looked like it had a swimmer most similar.
I’d already been watching the swimmers, and most of them seemed comparable to what I figured I’d look like after a few years out of the water
Now we get into “the rules.”
I think it’s better to jump into a lane with a swimmer of the same gender. Why? Well, if you’re not 100% on form, there’s a chance you’re going to have a few close brushes.
So now you have to share a lane with a stranger. How will you do this? My side and your side, or traffic pattern? With two people, you can do the former, and it may be easier, but with more than 2, you pretty much have to start swimming like you drive. Do you have this conversation, or is it just implied? There are probably some things to avoid too. If your lane partner is resting at the wall, do you still come in hot and do a flip turn? If you’re swimming back stroke, you really won’t know where they are until it's practically too late. I hate swimming backstroke and sharing lanes by the way, it’s the worst.
(Side story: One busy afternoon while I was in the middle of a 400yd backstroke, sticking tight to the lane divider, I felt my hand brush the swimmer in the next lane over. NBD, happens, they were 2 to a lane as well. I can’t see what’s going on, but I assume the person has passed. A few strokes later I brush the person again, although, it’s less brush this time and a bit more direct. Somehwere between horrified and embarrassed, I stopped, to catch a very non-plussed look from the woman next to me who was going about the same pace.)

The lifeguard. Ya, lifeguard, I feel like there are a lot actuivies I do where a lifeguard would be a really good idea. Swimming is actually not one of them. I mean, I guess if I have a heart attack, or back stroke myself right into the wall and KO, then it could be good. It'd be nice to believe one could go do their swim, and everyone else would mind their own buisness but at a pool, there's someone specifically stationed to stand around and judge you.
Posted by Dante at 4:48 AM