Russian-Res-Devils Loop
Distance: 76 miles
Climbing: 7,000 feet
Season: June, or late September
The gist:
Start at Devils Creek Trail Head, take the Seward Highway 2 miles to Tern Lake Picnic Area, and head down the Old Seward Highway to where it meets up with Crescent Creek Road/Quartz Creek Road. For a 90 miler and an additional 1500’ or so of climbing, add an out-and-back on Crescent Lake Trail. Otherwise, follow Crescent Creek Road to Quartz Creek Road to the Sterling Highway. Cross the highway, heading left toward Cooper, and take the first jeep road immediately on the right. The jeep road climbs steeply. Stay left past the junction with a cell tower. After passing a high point with a great overlook, the road spits you back down on the highway briefly. Ride the shoulder carefully for about 100 feet until you spot the ATV trail heading into the woods on the right. The ATV trail is actually rather techy in places, even though it parallels the roadway. It will briefly spit you back out on the shoulder twice on the way to Cooper: first very briefly onto a gravel shoulder before heading back into the woods; and again to cross a driveway (take the driveway for 20 feet and the ATV trail will dive left off the driveway), before eventually joining a utility corridor. The corridor can get a little mucky, and trail will exit to the left to follow a wide and safe gravel shoulder the rest of the way to Cooper.
This ATV segment sounds more complicated than it actually is, and is a million times safer to ride than riding the shoulder of the highway! The short section of highway between Cooper Landing and Quartz Creek Road is not safe to ride!
Head through Cooper, cross the Kenai River (pedestrian bridge is located on downstream side of bridge), and cross the highway onto Snug Harbor Road. Take Snug up to Russian Lakes trailhead. After riding the 20-some miles of Russian Lakes trail, it may be worth taking a quick side trip toward the campground to refill on water. This is close to the mid-point of the ride. When you hit the trail head/parking lot, go left, up the campground road toward the campgrounds. Water is available at the RV dump station on your left, maybe ¾ of a mile.
From Russian, head down to the Sterling Highway, go left on the highway to the Resurrection Pass Trail Head.
Take Res Pass Trail to Devils Junction, and drop down Devils Creek Trail back to the TH and your car.

Hints:
This is a really smooth link up, with a lot of gravel to tie the trails together, with very limited pavement. The trails themselves are pretty easy: Russian is about as advanced as things get, but it’s a “descent” on this route. As noted, the ATV connection between Quartz Creek Road and Cooper Landing sounds complicated, but it’s literally an ATV trail next to the road, just keep following it. Also as noted, it has a few short techy sections to keep it interesting, and is a major asset to have as an alternative a connection to avoid a very dangerous segment of roadway.
Water is available at the Tern Lake Picnic Area (two people to use this pump), Quartz Creek Boat Launch (spigot), and the Russian River Campground (spigot).
The season on this ride is pretty much June onward, and is limited by snow in Res and Devils Pass early in the month, and vegetation on Russian later in the month. It’s pretty likely that this ride will include some snow drift cyclocross action through Devils Pass.
This loop could open up in September-Early October in cold and dry autumns.

I hit this loop for the first time on 2016 with Carey G, and again this year with Chuck D. Both years, the early to mid-June timeframe seemed to be the money spot for low veg and few snow crossings.
Both years, I opted for the simpler 76-mile option, and both years, the total ride time was around 7:45 at a reasonable pace, though could easily be driven down by quite a bit with more motivation.

In a head-to-head between this loop or the Resurrection-Devils-Johnson Loop (90 miles), I pick this one as my favorite.

I’d completed RDJ in various formats and rig choices in 2013, 14, and 15, but I just wasn’t super pleased with this route, and I took a break from the RDJ last season. The forecasts and fast-growing veg on Johnson last year didn’t inspire me to get after it.
This year, I had a choice for the weekend of June 24-25: do Arctic MTB’s Double-Down Race on a course designed by Ryan G, and well suited for someone who does well on climb-heavy and rooty courses (ya, that’s me), or head to the Kenai. It was a tough call, but the forecast was spectacular, and with July Fourth the following weekend – a holiday I try not to spend on the Peninsula – and a summer so far lacking in sunny weekends, it seemed like a Kenai Epic was a worthy pursuit.
Meredith was interested in riding the trail portion of the RDJ this year, and after mulling some different options, we came up with a new twist.
For starters, we’d ride the route clockwise, which is the opposite direction of how I’ve always ridden it. We’d also start the ride at the North Johnson Pass Trail Head, and this time, I’d employ a road bike for the long road segment.
The key element to this plan was just that: we’d be leaving my road bike at a colleague of Meredith, Doug’s, cabin, outside Hope.
The bane of this loop is it’s 28 miles of road (24 paved) between North JP TH, and the North Resurrection Pass Trail Head. This long stretch of pavement has long steered the counter-clockwise routing of the ride, as at least that put the bulk of the hateful road riding pointed toward sea level.
I tried to ease the pain of this long road connection in previous renditions by riding a hard tail for the whole loop, or having a hard tail staged at the North JP TH for just the road portion.
I wasn’t sure that riding a road bike after 67 miles would really make me think better of this loop, but it was obvious almost immediately: the 24-miles between Doug’s and the car went way smoother and faster with drop bars and 28c tires. Lest I say it, I really enjoyed the road connection!
The other two benefits however, were less apparent beforehand, but definitely afterward. First, riding Johnson Pass north to south right off the bat gets the most technical part of the ride out of the way immediately, and second, climbing Devils and up to Res is downright pleasant compared to the opposite. Climbing the north side of Res is the most tedious, dull, and hateful section of trail on the Kenai…not that I have strong opinions on it or anything...
Early on in the day, we bumped into Kenai 250 riders Aaron, Dusty, Anson, and Kevin. I had a feeling we might see a few of the boys later on.
The clouds lifted as rode through swarms of hatching bugs on Johnson, but temps stayed reasonable. In the south Johnson TH I popped my helmet off my head, and a mass of dead midges fell from my head!
We stopped at the “rust pipe” at Tern Lake Day Use Area on the 7-mile road connection between south JP and Devils for a water refill. Up Devils we caught back up with Kevin, and could see Anson a little ways off as we neared the high point.
For time management (Meredith’s ride would end around 67 miles at Doug’s cabin, while mine would continue another 24 miles to the car) we decided this would be a good time to split off.
I bombed through the descent to Hope, and onward to the cabin. Having learned from before, I left the clock running through my turnaround for feed-management purposes. I dumped my pack, changed to road shoes, snapped in some dark lenses, and made sure to grab my car key.
I felt really good, and as I steered the road bike out onto the Hope Highway, my legs told me to give it all I had.
I had an absolute blast powering up Hope Highway and onward on the bike path to Johnson.
About a mile or two before I made it to the car, my legs started to fizzle, so I tapped a little deeper, casting aside the thought of a cool down, and spinning the Solace’s slick tires over loose stones right up the short gravel road to the car.
I rolled in an awesome and complete physical and mental wreck.
Great ride. 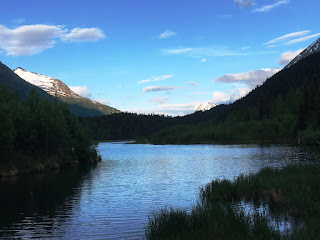 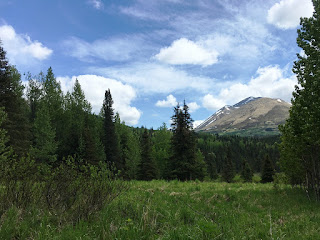 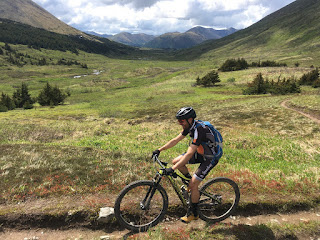 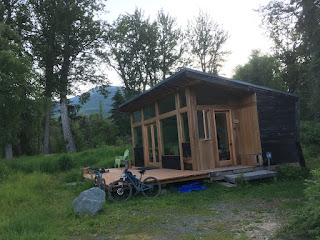 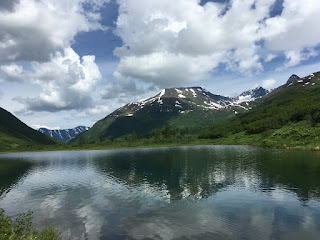 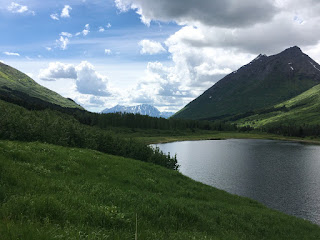 Ready for a Kenai July epic?
Here’s my favorite: