Some type of white dusty chemical covered the shoulders and center lane of the Sterling highway as I approached Soldotna on my way to work. I couldn't figure it out for the first mile. It must have snowed I thought, but there was no sign of snow anywhere else, and the travel lane itself was mostly dry. Eventually, it dawned on me that the edge of the cold pavement was the only place the light dusting had stuck. Not really much to write home about, it'd be gone in another 20 minutes.

Four hours later I headed home for a few hours to go for a run and grab a bite before rushing back off to meetings. Thoroughly stressed about my schedule covering elections, school events, and more meetings, I hardly noticed as the rain splattering on my windshield changed over to snow just outside of Soldotna.

"Oh, so this is the first snow I've seen down here," hardly registered as a passing thought.

Nothing was sticking, I got a little snow on me Friday riding my Skilak Roubaix loop and have watched the mountains steadily grow their white coats for over a month.

As I approached Sterling I noticed the atv trails along the highway had sporadic patches of snow, and by the time I turned onto my street, I found it entirely blanketed with an inch of the white stuff, while the tips of the surrounding spruce grew frosty.


Suddenly, the image before me, the single set of tire tracks leading down the white road, the big flakes falling steadily, back dropped by the winter sky no higher than the top of the frosty spruces, sent a surge, slowly but powerfully starting at the top of my neck down through my back. 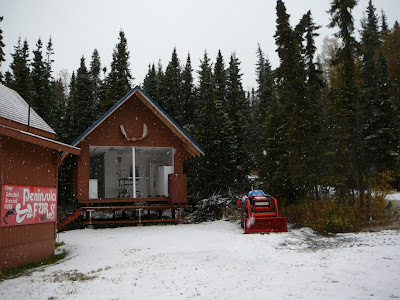 I sucked in air as it lowered down through my chest, tensed as it passed through my lower back into my legs, drawing them rigid, until the feeling reached the tips of my toes, threatening to explode out their very tips. 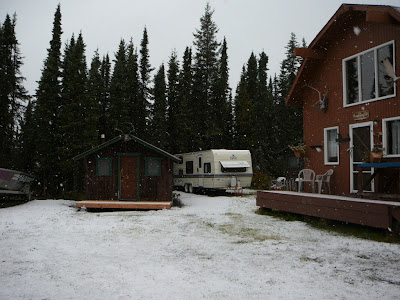 It was an excitement, that momentarily made me want to slam my gas pedal to the floor, to jump out of the car and sprint into the woods, to shake the nearby trees and watch the snow pour off in all directions.

My car was woefully under prepared for snow and ice, my bike had likely just been relegated to a trainer, and the skis I hoped to enjoy the snow on were likely still in a shop, awaiting my eventual purchase; but all this didn't matter suddenly. My mind had just clicked in, and was skating down the road in front of me, dreaming of a coming winter.


This week saw the unofficial start of winter! six to seven inches fell On Tuesday through Wednesday morning, though only two crusty inches stuck it out. Thursday saw an additional couple of inches fall to the south. Sterling hardly saw an inch today, while I was nearly whited out on my way to Anchor Point for a story. Rain and warmer temps (that means high/mid 40's) are in the forecast for this weekend though so it won't last. 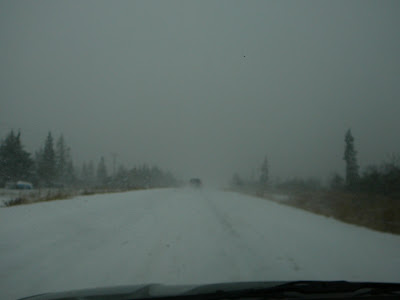 10:30am on the Sterling Highway between Kasilof and Ninilchik Thursday.
Posted by Dante at 10:33 PM

The landscape truely is amazing. You have material for a book.