The following is the second part of what I'm calling my AKlure pieces, documenting how though I may have never known it, the road north was one I was destined to follow. 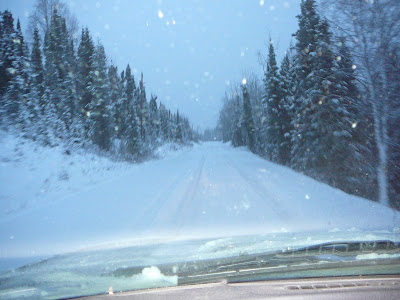 A snowy road on the drive to work last week

Four years ago this summer, I left for a one week trip of a lifetime, or so I thought.
I was bound for the 49th state, the last frontier, to ride my bike through its meandering single track trails, to see sights I could only imagine.
At some point in high school, my mother, told me that she would send me on a trip, anywhere in the world. “Any” had hardly escaped her lips before my mind was made, though I held my card aside. For four years I kept it there. I think she expected I’d want to do a snowboard camp, a NOLS course, something my peers might be doing. Then, as I entered my senior year, I casually mentioned to my mother one evening, that we should start looking at plane tickets to Alaska, I had a chip in my pocket, and I was ready to play it.
I could see the lump in my mother’s throat, but I’d done a bit of research, and found a company that lead tours, making the idea a bit more palpable. Upon enquiry, it was clear, the outfit didn’t get a whole bunch of 18 year olds, in fact, I may have been the first; I’m not sure. Nonetheless they were happy to help.
For a week that July, I tore through a wilderness as vast and beautiful as I could have ever imagined by day, recharging with fresh salmon and halibut by night, passing out from exhaustion under the midnight sun.
On day five, what was supposed to be a rest day, I found myself with the two guides, sitting on the tundra plateau above Lost Lake outside of Seward. The sun beating down on us, wild flowers blooming in all direction, surrounded by snow clad peaks, watching wildlife traverse the distant hillsides, I knew I had to come back, for longer than a week. 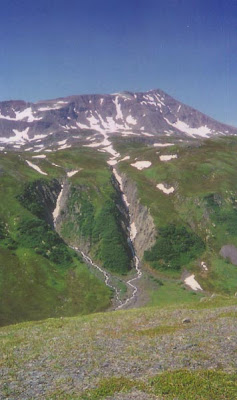 Two gorgeous gorges across the tundra plateau above Lost Lake seen July 2004
The summer passed and I went on to start my college career at a small school in upstate New York. I may have had a better sense of place than most. I think that while most of my peers were out reveling in their new found freedoms, I was a bit more concerned about how fully I’d make use of that freedom. Not too long into my first year I developed a plan to take one step, each year, a bit further from home. I’d use my chosen profession of journalism to move about the country, ultimately taking me north to spend the first year of my post graduate life living and working as a reporter in Alaska.

The tundra plateau above Lost Lake
In four years however, perspectives and plans change. Journalism started to fade from the radar, riding began to dominate more and more of my time. A semester abroad in New Zealand lead to new aspirations. Alaska began to look cold dark and forbidding.
By September of last year, I don’t believe Alaska was even minutely a part of my life anymore. At the time, I was pursuing an internship with a land trust, and was thinking urban design was my calling. And then, quite out of the blue, a friend called and asked if I wanted a job working at a fish camp in Sterling the following summer.

Ditto
Hardly a week had school been in session, and already I was being asked to think about next summer. I might have said no immediately, but images of the Kenai’s lush green and white streaked mountainsides, teal blue rivers and epic riding lurked in my mind. I said I’d consider it, and as the weeks went by, the idea looked better and better.
A racing season that saw me reach the top of one class and broach the bottom of another, far more aggressive one requiring ever more commitment to training and routine, followed by a break-up, and a flattening economy, lead me to realize that gutting fish in Alaska could be the best thing I had going for me--
A few weeks ago, sitting on the same plateau above Lost Lake, I found myself marveling at the reality that this was now my home, that the Russian River, Crescent Lake, Resurrection and Lost Lake trails were my home turf single-track rides, and that I’d just accepted a job offer working as a reporter for a small local daily in Kenai, Alaska.
Like a fish striking a brightly colored lure, I too was hooked by the flash of AKlure. 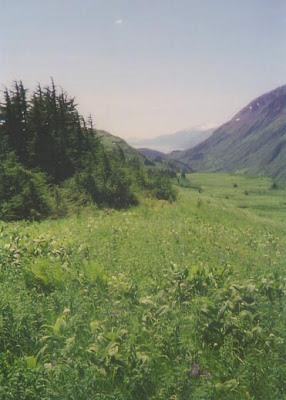 Looking towards Seward
Posted by Dante at 10:06 PM