I come from a family that knows how to find fish, and get them out of the water through most of the year. When it comes to stalking land animals though, well, it took my parents over ten years of driving us around on the seldom traveled mountain roads of the Green Mountains in search of Vermont’s largest ungulate, the moose, before they finally found what they were looking for. It’s a good thing we weren’t hoping to have moose burger at any point during that period; I think the buns would have grown moldy.
Last week however, I decided it was about time I introduced myself to the age old tradition chasing bird. 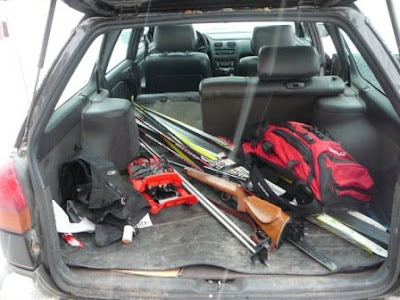 True life in the back of the suby

I’ve seen fools hens, or spruce grouse, commonly on many of my hikes and rides. They’re escape plan, though perhaps effective against their natural predators, is simply to fly a short distance and freeze, making them easy targets. They’re an ideal beginner quarry.
Before entering the woods in search of my target however, I knew I better sit down with myself and have a little chat on where I should hunt, where I could hunt legally and most importantly perhaps, what I would do if I was so fortunate to take a bird.
So I dusted off that age old book of traditions that’s passed down from one generation of great hunters to the next and made myself comfortable for a spell with Google.
It took a good ten to fifteen studious minutes to browse through the state’s game management unit maps and associated regulations, bag limits and season periods.
I had to get up and take a stretch you might imagine, after such an exhaustive search, before sitting back down for another five, to go over the hen’s preferred habitats.
Of course, the hard part came when I had to leave Google. There are some things that these wondrous age old resources can’t teach you, and one of them is how to clean a bird. For that, I had to go out back and get my hands dirty, on the Youtube.
Boy, that was a really eye opener to say the least, but I was ready. The knowledge of my fathers, their fathers and all those who’d tread both the game path and the URL, had been transplanted to another generation in me.
You can imagine the emotions I felt, taking part in a tradition that runs as far back in my past as say, wearing lederhosen and eating bratwurst, and with a surname name like Petri, you know that’s deep.
Tears almost rolled down my cheeks as I purchased my first hunting license from my neighborhood hunting license sales clerk on the Fish and Game department’s website. 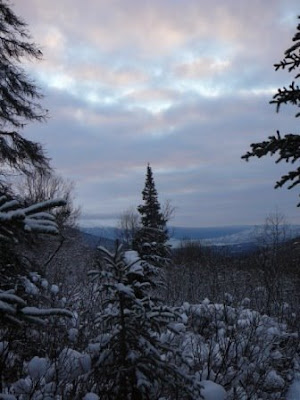 Ok, so hunting is no more a part of my heritage than West African drumming, but I decided last weekend to buck tradition and take a shot, sorry, couldn’t help it, at a new activity.
The day before I was organizing my side of the deep freezer packed with fish, when I came to the disturbing discovery that I had about six more halibut steaks left. I eat halibut every Sunday; it’s a nice break from my salmon diet, which, fear not, I still have plenty left. On that note, mom and pop, you better enjoy the rest of those precious white steaks!
While I’m not tiring of salmon, I enjoy the break once each week. As I piled my fish back in, I mulled over my options. I could try and trade some salmon with someone, but most people I know have plenty of it. It’s too cold to smoke anymore salmon and I don’t have any other game like moose or caribou to trade with, and if I did, that would solve my problem that would solve my problem wouldn’t it.
Suddenly the thought of those seemingly slow witted birds crossed my mind, and I realized what I had to do.
Later that afternoon Joe set me up with a .22 and a couple boxes of ammo. I brought the gun, out back, and started doing target practice. The site was pretty far off, but a half hour, a few clips and some fiddling gone by, I had it shooting square enough that I thought I could knock a hen off its roost.
The next morning I took off for the foot of the Kenai Mountains to try my luck. I’ll say that I didn’t have much, to make it short.
In five and a half hours of wandering among the spruce clad ridges I only flushed two birds. At the time I had shells with small game shot loaded in the clip. I realized immediately when I flushed two hens I would be better off with slugs.
The birds like to make short flights from one tree to another, hiding themselves in the dense cover around the trunks as soon as they can. Often they’re on the ground and never take flight at all. If you can keep your eye on them though, they’ll remain paralyzed for long enough to line up a shot.
By the time I’d reloaded, the two birds had moved down the ridge and I had no interest in chasing them back down.

This is certainly a new twist on an old activity, and as snow continues to accumulate, it will likely become something of a biathlon sport I’m looking forward to already.
Oh ya, some fresh bird will look good in the oven on Sundays too if I can manage!

UPDATE:
I can manage. I had Thursday off in compensation for having to work the next one, so I decided to chase bird up near Fuller Lake. Being the middle of the week I wasn’t too worried about running into anyone. I took a hen and a Ptarmigan home. Those are stories for another post, but here are pictures. 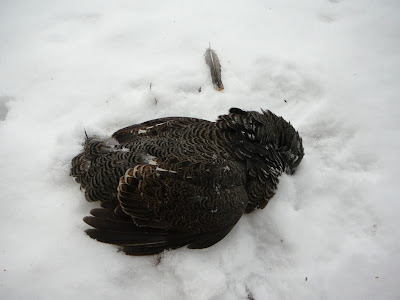 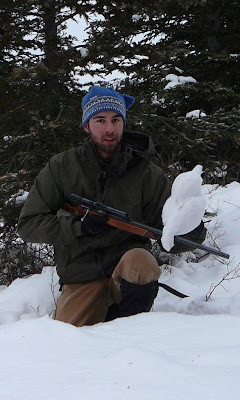 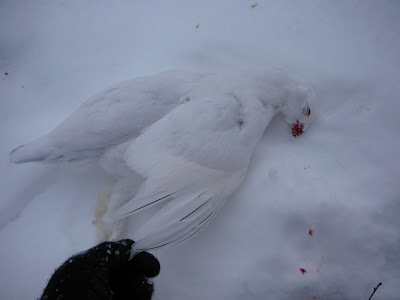 Also, there was a descent quake quake tonight, shook the lodge pretty good.
Posted by Dante at 9:58 PM

You are a young John Gierach, although my daughter was not as impressed.

Congrats on your "fowl" dinner. It's a good thing to gather your own food.