The flash of AKlure; Part 2

My first taste of rarefied Alaskan air came not on some high remote peak, or even a rain drenched Anchorage tarmac; it was most likely somewhere between my desk and my bed, back east, ten years ago.
I don’t remember how or exactly when I first happened across John Haines’, “The Stars, the Snow, the Fire: Twenty Five Years in the Alaska Wilderness.” I do know, that as I looked over the cover of the 1989 version, I was struck both by the image of a jagged snow-clad peak reflecting across a taiga surrounded lake, and by a review above the image.
The review, by well noted outdoor author Barry Lopez proclaimed, “To read Haines is to enter a clearing in the woods, to feel calmed, and that one was once here, centuries ago.”
I felt as though I instantly identified with Lopez’s critique, even though I had yet to turn a page.
At about this time, I was beginning to venture beyond what had been the comfortable reach of my “neighborhood.” When I say neighborhood, I really mean the trails that extended a mile or so out from my backyard.
I’d learned that the hills beyond were filled with miles upon miles of winding trails, climbing distant ridges, running alongside gushing brooks and dead ending where man’s axe and machine had ceased to continue on. I wanted more than ever to explore these ‘distant’ locales, but I had a setback; I’d have to do much of it on my own, something I was hardly up for.
My view of those woods ten years ago was filled with unknown dangers, endlessly winding trail systems leading to nowhere and a forest full of wild beasts. Though I had a great friend that often rode with me out there, we had different interests and more and more I found myself riding on my own.
Haines’ stories of his own life, often alone, in a cold and sometimes bleak landscape, became my inspiration. Haines’ curiosity of what lay beyond the next ridge became my own. His praise of self sufficiency and independence were virtues I tried to incorporate.
As I ventured out into new grounds, carried not by dog sled but instead a bike, I found myself looking at the landscape not as a small patch of hills in Vermont, but something I had never seen before. I was in Alaska.
Or at least, that’s how I pictured myself. I often felt so alone out in those woods, that I could reasonably believe I was a full day’s walk from the nearest person. I stopped sometimes, at dark unknown intersections, or popped off the bike to walk through deep muck, and felt a creeping sensation that something else, watched my every step. I was quite sure, that the trails I rode looked no different than the trails I might have ridden if I’d grown up in Haines’ backyard.
Often, the only calm I felt came from the trails themselves. The occasional eroded water bar, rusted out culvert, or even a half regrown clearing in the middle of the dense growth, reminded me that someone had been here before. Maybe it had been months, years, or longer I sometimes thought, but, ‘someone had been here, and now I was too,’ I would think to myself.
Haines’ book fueled an Alaskan obsession, sustained over much of the following decade. Any book having to do with the place instantly caught my attention. Those stories, combined with Haines’, ultimately lead me to finally visit and ride in there after graduating high school.
Now I live in that place, and I explore real Alaskan mountains on bike and on foot, often alone; though Haines memoir still holds a permanent place on my bedside table. 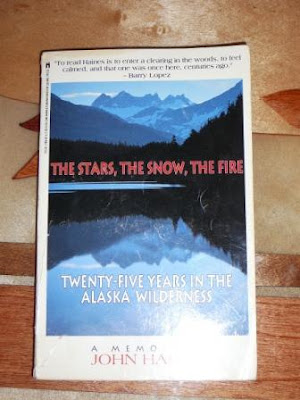 Here's some photos from my hike to Fuller Lake this weekend. A thick ice fog was holding on the flats so it was awfully nice as I approached the foot of the hills to break out into the blue and find that I had escaped. The last week has been bitterly cold, dry and bright so the mountains are still largely bare except for at their upper crowns. 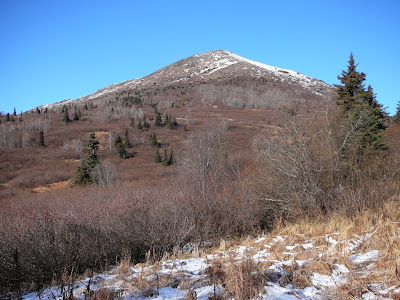 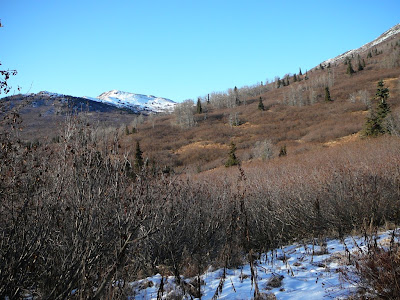 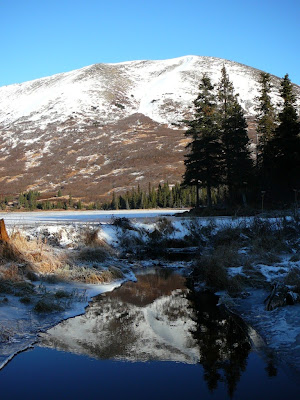 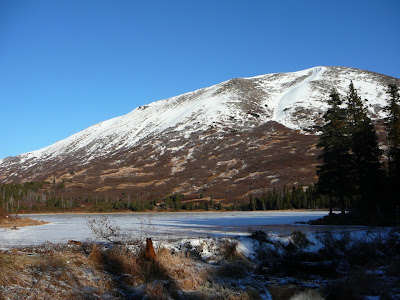 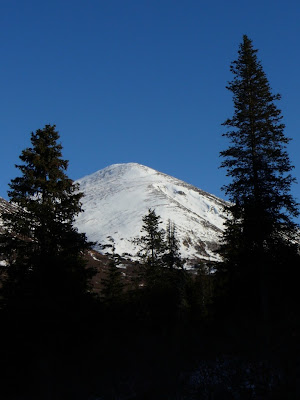 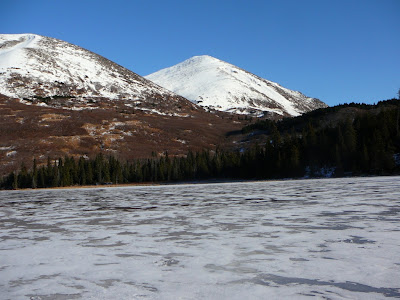 Small lakes and ponds have been iced up for at least a week and a half now. All the lakes I crossed had a good 4 inches on them thanks to some sub zero mornings last week. 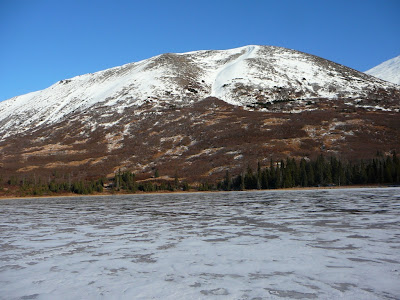 If the present moisture system fails to deliver this 4k will be one of the options this coming weekend. The snow pack is dry, baked, and crisp, perfect for holding the bite of crampons 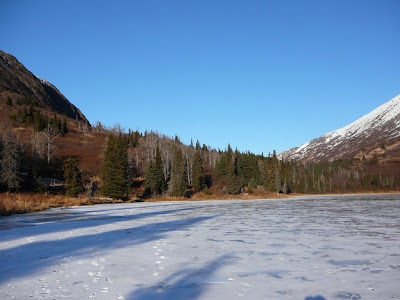 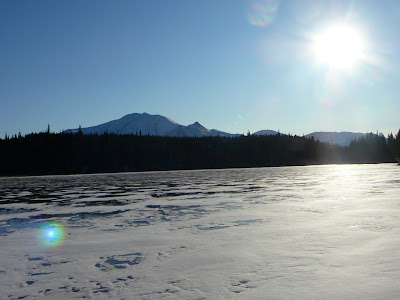 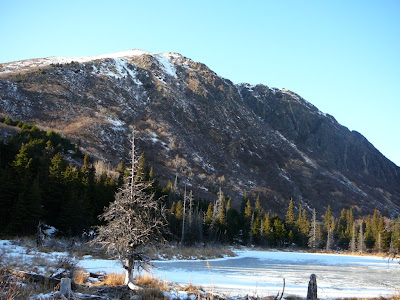 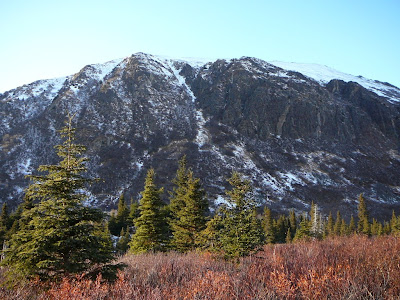 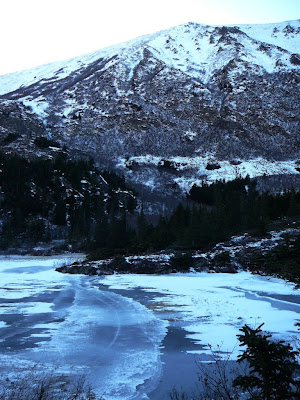 The north end of Fuller Lake 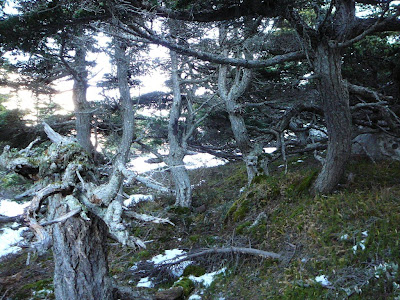 North of Fuller lake is made up of very low steep ridges running n-s covered in these dwarf forests. To say the least, this area must get the snot rocked out of it by gales coming up off the gulf and over the ice sheet and tunneling down the high valley the lake sits in. No wind on my hike. I was sure I was going to find the keebler elves in here. 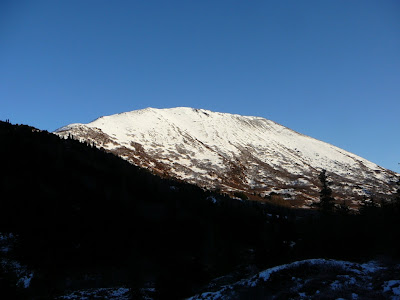 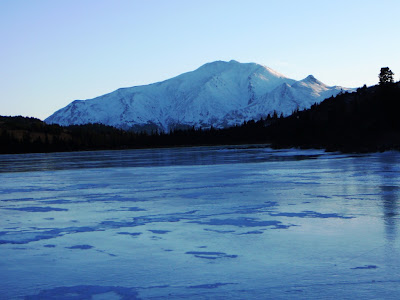 I like how deceptive this picture is. It looks as though Fuller Lake laps at the walls of the six mile distant Russian mountain on the other side of the upper Kenai River. 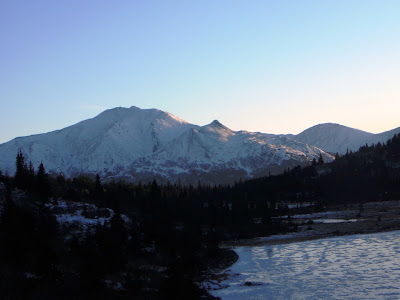 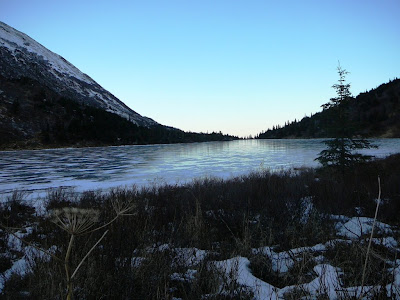 Looking back north. It was possible to see the Chugach mountains outside Anchorage on the other side of Chicaloon Bay and Cook Inlet, but the camera washed them out 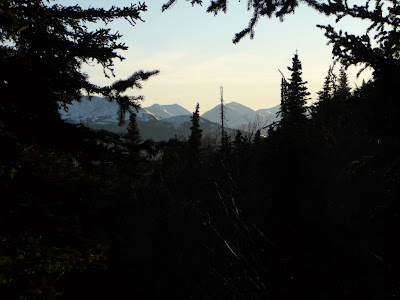 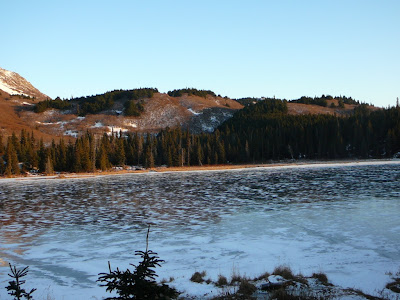 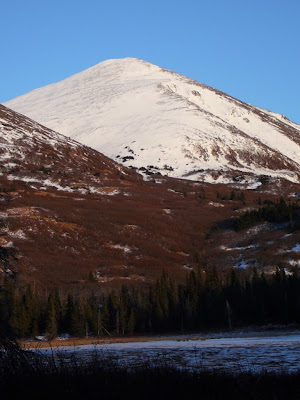 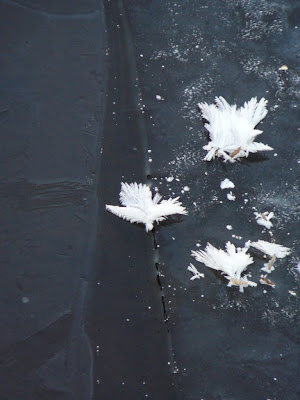 These frost formations on a small brook reminded me of the frozen versions of the many insects that emerge from these streams in the summer. 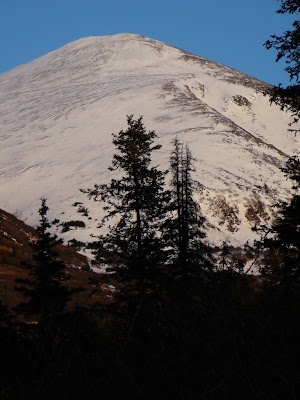 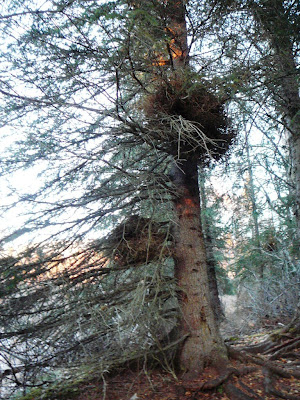 I'm not sure what these balls are. At first I passed them off for squirrel nests, but they're much too low, and when I tugged at them they were securely attached to the limbs of the trees. They may be some type of growth, I'll have to find out. 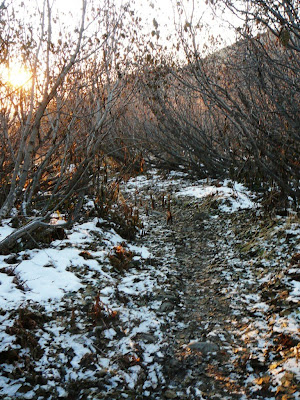 Tunnel vision in the willows 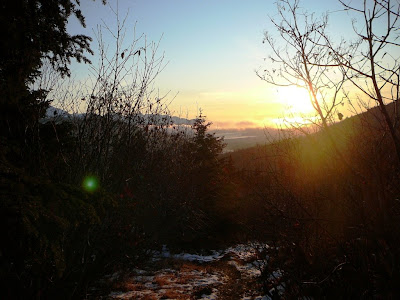 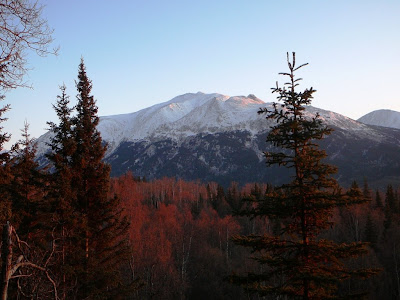 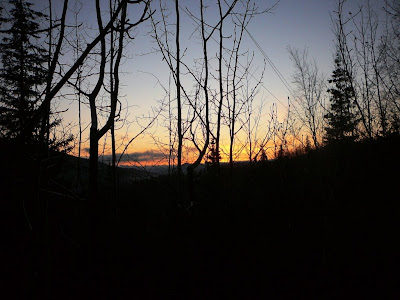 If you've never had the opportunity to walk off an Alaskan mountain in a slow polar November sunset, I recommend it...