It’s time to shed some light on a dark and overrated myth of the north.
Three and a half months ago I made the decision to stay up here through the dark and cold Alaska winter.
Here I am today, on the cusp of the shortest day of the year, a day that won’t last five and a half hours, but my sanity seems to be just as firm as can be.
Friends in the Lower worried for me back in early September. I worried in early November when the sun struggled to make it over the scraggly spruce.
All for nothing though.
I’ve learned, as with anything, the dark is what you make of it. For me I make very little of it.
If you wanted to sit your house, and watch the sun work so hard each day to generate a few short hours of light, and listen to depressing music thinking about how lousy it was that the dark came back so quickly, this place would be hell.
If, on the other hand, all you’re thinking about is snapping into your skate skis, flipping on a little AA powered sunlight, and jettisoning around on the cold fast snowy trails after work, it’s paradise. If all you think about, is the fact that those slow sunrises and sunsets marinate the mountains and atmospheric features on all sides in brilliant pink, orange, red and magenta on any drive to or from work or the backcountry, it’s utopia. If all you think about, is that come April, the sun will shine on corn crusted mountains until 9:30-10 each night, you’ll laugh at all those who worried for you.
Living an active lifestyle, and generating Vitamin D everytime you crest a steep climb, break a land speed record on skate skis or throw a magnificent white flume of powder on the side of some epic Alaska real estate, entirely compensates for the body’s inability to absorb plentiful sunlight this time of year.
Sure, there are days when I feel the nip of the brevity of the light. They’re not often the days I’m out chasing bird however, nor the days I’m out slashing on the slopes of Turnagain.
They’re the days I drive to work, the sun yet to rise. I go in, make some calls, write some words, and look up to see the orange glow of sunrise on the building next door. I look down, and many words later, I look up again, to see the orange glow is still there, but coming from a different angle. When I step out of the office, I see my car, parked at the other end of the lot, still wrapped in the darkness I left it in at the beginning of the day.
Those days, I sometimes feel the burn of human light. Of a motorist’s brights in the oncoming lane, of florescence beaming overhead all day and screens, searing my pupils.
And if it were all so bad, in the cool woods, I switch off my headlamp, and in a second, the starlit snow sucks it all away. 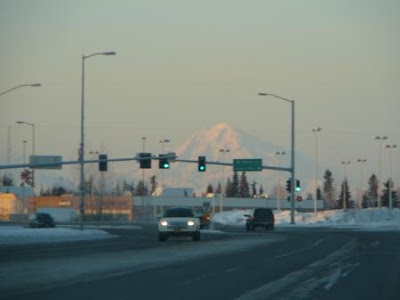 The sun makes a slow rise on a clear morning, casting Redoubt Volcano, seen from downtown Kenai, in a pink glow.

While the daylight will soon begin to grow, winter has hardly begun. There’ll certainly be many more challenges ahead, but for now, it’s begun to feel that one of the greatest has been stepped over with little effort.
Posted by Dante at 8:46 PM

dante i like your blog alot, your writing is very on point and direct. take care and stay warm. best thoughts your cuz. chris

Thanks Chris, appreciate the compliments.
Hope all is well in Portland.

Dante -- I'm glad that you're not letting the darkness get you down, but please don't get too comfortable up there!