Despite every attempt made by the weather and airlines to stall or disrupt my short trip back east for Christmas, I managed to have a pretty great time.
The first class seating from Anchorage to Minneapolis, and then onward to Detroit were a bit overrated I have to say. Though the seats are wider, they folded no farther back than an ordinary coach seat, and even lacked the fold out head rest wings I had on my coach seat to and from New Zealand making comfortable sleep a reality.
I was pretty sure at one point that I was going to spend the holiday in Detroit, but fortunately slow ground crews and sloppy weather kept my flight to Burlington on the ground long enough for me to catch it, though I spent the first part of my flight trying to cool off and catch my breath from the mile long sprint between terminals.
Back east I found Vermont covered in almost 2 feet of snow, though as I drove to Middlebury the sky spittled drops of rain, hinting at what would be a blue Christmas. In someways, it was reassuring.
On Tuesday as I drove out to get some photos of the subject of an article, heavy snow squalls blew through the Central Peninsula, making my heart beat to that hollow anxious rhythm.
Though I knew I'd be gone for only a few short days, and was looking forward to seeing family and friends, I couldn't help but feel a bit of despair at my leaving.
I was reminded of the feelings I had on my slow train ride north from NYC on the long road home from New Zealand.
I'd walk through the front door of my parents home exactly seven months and a few hours after leaving in May.
The lawn was lush and green, lilacs bloomed and summer seemed poised to settle in for good that morning. Now I'd find that same place stark with winter.
Seasons change just like people.
Though Alaska has perhaps had less of an impact than New Zealand did on my personality, seven months is still a long time in the overall lifespan of a 23 year old. Plenty of time to make a few changes.
My anxieties over what those close to me would think upon my return however, were overshadowed by my own concerns that my trip back east might shake me.
Deep seated in the palpation of my heart was not so much a fear that I'd miss out on anything in Alaska in three days but more that being close to family, old friends, forgotten amenities and other aspects of life I might not have in the north, would drain my arctic enthusiasm and make me long to return.
I've been so fortunate to have suffered little homesickness in my time here. I can only attribute it to having so much to do and see.
I worried however, that those old familiar feelings would make me realize there was a hole in my life.
Sunday morning, I sat on a twin engine plane, my head resting on the frigid oval window pane. To the southeast, a magnificent red and orange glow radiated off the Kenai Mountains as the propellers churned the -2o something degree air on the short flight back to Kenai.
I felt no hole, if anything I was whole.

The trip home only reaffirmed that I've got some great friends on the far coast who make no shortage of an effort to welcome me every time I go there.
More importantly, I spent some quality time with a few folks in East Middlebury. I know my parents and grandmother aren't 100% behind my residence up here, the later is about 0% for it despite my efforts to convince her otherwise. As always, they've remained an integral part of anything I've done in life, whether they'd do it themselves or not!
Lastly of course, the day spent snowboarding at the old Snowbowl with Tony seemed to pour some concrete on a relationship I've always considered fissured by the distance of age and travels. I hope it holds.

I took very few photos back home. Though I did an excellent ski with Ashar, Amy, the dogs and a few friends of theirs, I never really bothered to pull out the camera. 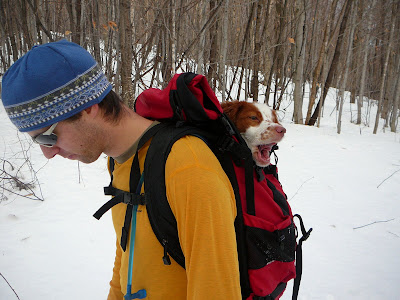 Amy snapped this pic of their new pup Emmy taking a break from the unbroken trail somewhere in Goshen. The yawn was an indication of here intent to soon snuggle down and take a nap. I did my best not to intterupt her but the short skis matched with even shorter polles on crusty snow left me flailing, though never falling, more than once. 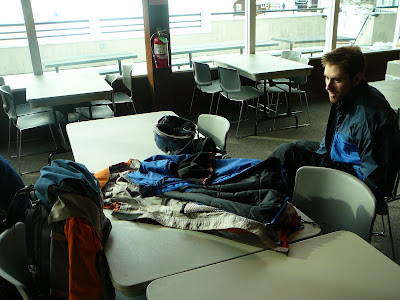 Bernie for a day of carving ice on the slopes of the bowl. He and Scott made the trip up from Saratoga to visit and ski on Friday. The pale lighting cast by the great picture windows at the lodge was always a favorite for candid photos in highschool.


I can't possibly thank everyone I got to see here but I will say it was great to see everyone I did and for those missed, I hope to catch you on my next visit in another couple months.
Posted by Dante at 9:43 PM

Glad you had a good trip home. Weather here's been beautiful. I'm not sure about the temp, but prop. somewhere between 65 and 80 most days. Have fun up in Alaska!