Eleven hour day at the office today, need sleep, but enjoy the photos.

I put on my big city fancy looky glasses this weekend and headed to the big town to get an avalanche beacon and spend the night hanging out with Ethan, Josh, and their girlfriends in Anchorage, or Skanchorage, a term I recently learned. Anyone who's spent a bit of time around me knows I have a strong habit of referring to familiar places by unfamiliar names. This one's pretty catchy.

I ended up spending two hours stuck in traffic just north of Girdwood because of a big wreck. It did give me a chance to catch up with my friend Rachel back in Jersey over the phone however, and I snapped a shot here of an icy and moon like Turnagain Arm. 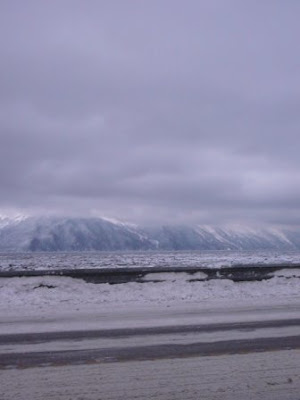 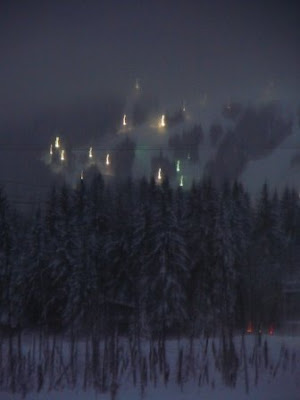 After dark, the lights came on over the slopes of Aleyeska. If I'd known I was going to be stuck for so long I might have gone over put a few runs in.

After a hearty breakfast at Jackie's Diner on Saturday morning compliments of Alexa, Josh's girlfriend; Josh, Ethan and I headed into Turnagain. The skies were absolutely cloudless, a rarity in Alaska, and I'm told pretty much a phenomenon in Turnagain. What's more the clear skies had been preceded by a massive dump (a reported 43" in the northern part of the pass) followed by a deep freeze, drying and consolidating the snow pack. Conditions were both stable and set up to be legendary as far as snow quality.
The temps were still hanging in the single digits at sea level as we sped out of Anchor town (see see, didn't even think about it...) and were probably at 0 in the pass, though I never checked. 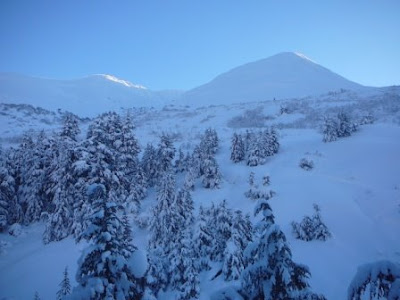 Corn Biscuit in the center right, we skied Magnum partially shown to the left. A wise decision.

The first climb totally sucked. The dry powder and a fresh unconsolidated up track caused me to drop my footing anywhere from 3-12" every step. Additionally the cold temps made my snowshoe bindings stiff, making it hard to get them fitting snugly. They thus loosened a few times and pointed themselves nose-in to the side of the narrow up track, essentially causing one foot to have to break trail for an extended distance until I could hit a safe place to readjust. By the time I approached the crest I could only see the track a few feet in front of my face. 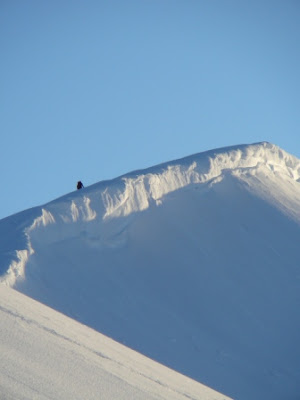 Looking up to see this towering ahead was a welcome sight. A skier traverses the top of Magnum. 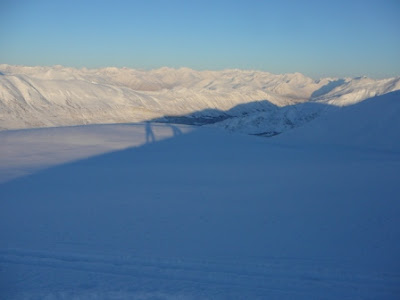 Ethan and my silhouette is cast across Turnagain Pass. 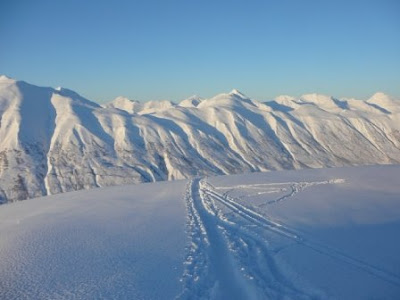 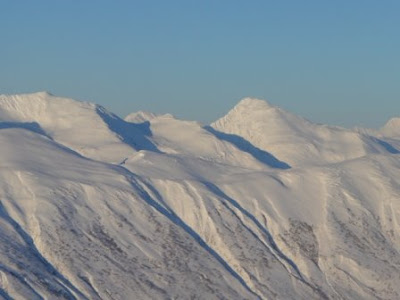 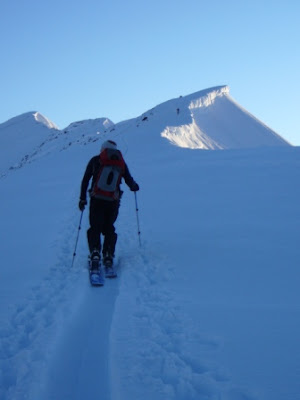 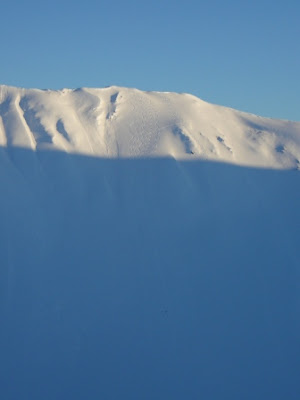 How about some seriously awesome looking lines on Sunburst 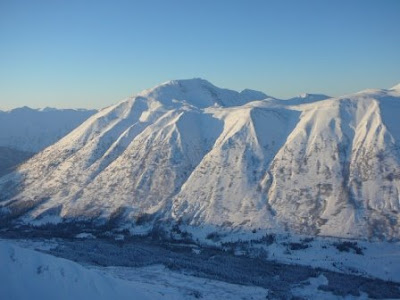 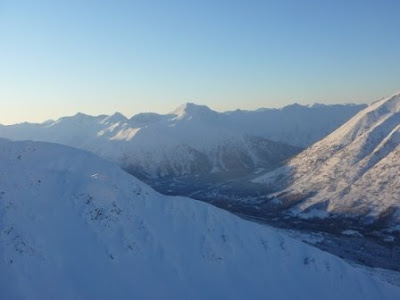 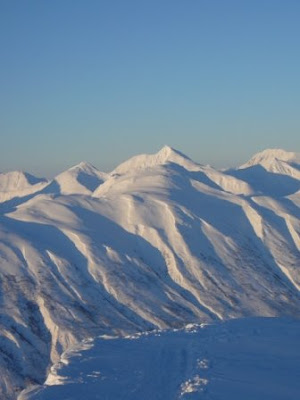 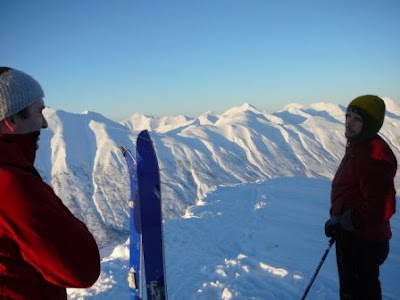 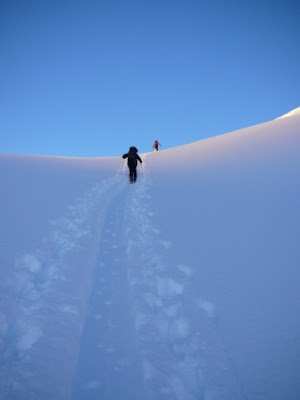 Leaving the dark side. This is such an awesome shot. The skier ahead climbs from behind the shadow cast by Corn biscuit onto the sunlit ridge of Magnum joining her friend in the warm orange glow. 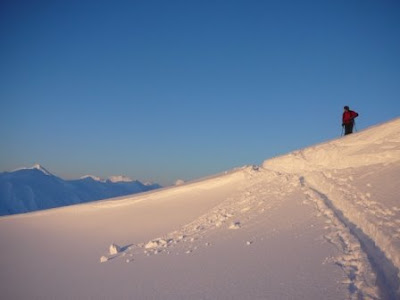 Big lips. This was also a favorite shot of the day, and made the cover of Monday's Clarion. Josh takes in the view along the edge of the wind lip formed over the crest of Magnum. 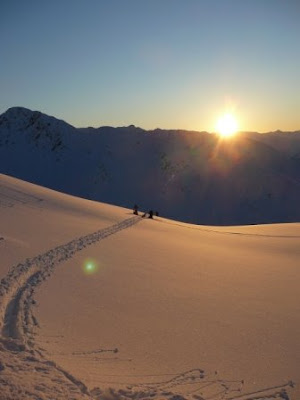 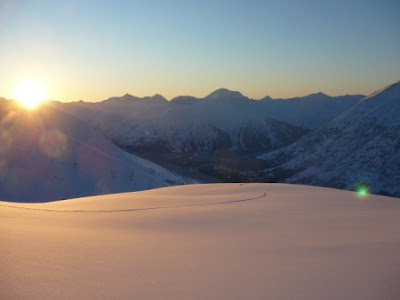 I love this shot so much. Unfortunately my lense needs cleaning, the spots really screwed with it. 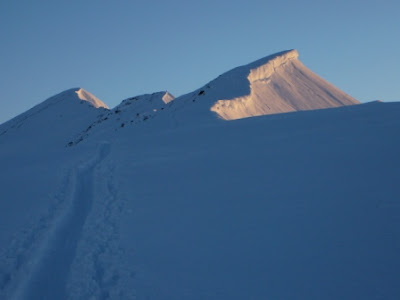 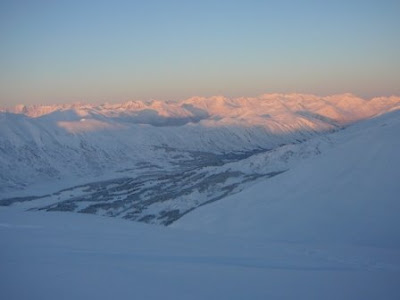 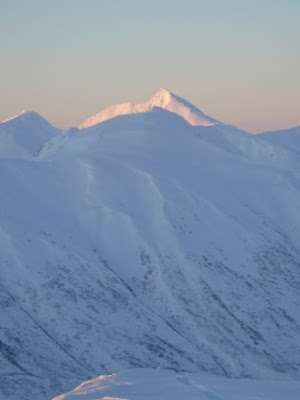 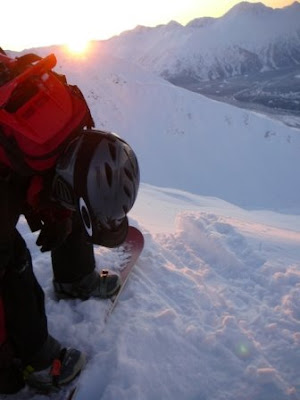 On the final run I asked Josh to hold my camera for me so I could film the run dropping in off the lip. Unfortunately, not long after making the drop, I either dipped the camera into the powder or inadvertanly sprayed it, covering the lense for the rest of the run, leaving noting but an audio of the wind whistling by and my occasionally hooting as I threw a spray. 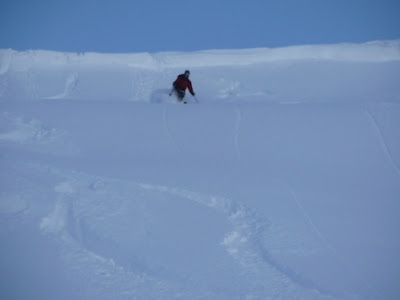 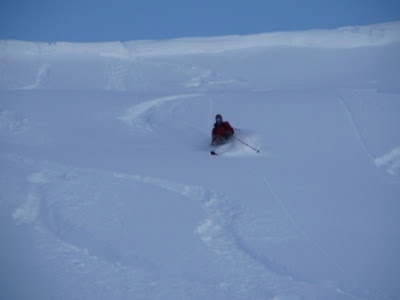 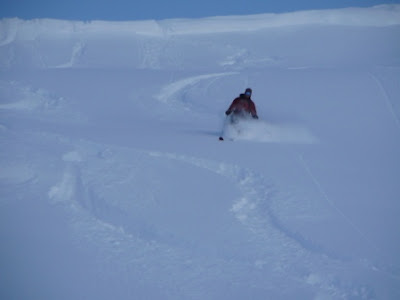 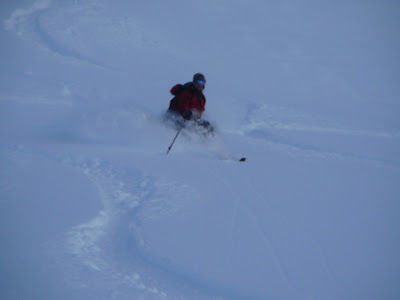 A few fuzzy shots of Josh. I'm glad any came out, for a few minutes it looked like the camera's foray into the white oblivion was going to leave it incapacitated for life.
Our run out was pretty hysterical. In the fading light we made a combat descent through some whippy willow growths before dropping into a creek bottom, leading us into the mouth of a short canyon. Upon entering the narrow walled canyon we all made a sharp right turn, only to come flying around the bend to see open water! Though the road was only a minute or two beyond, hi ting water with the temps that low would have been less than pleasant. All three of us cleared it and came out laughing hysterically.
Unfortunately our enthusiasm was brought to a jarring halt back in the lot. A weary looking skier approached us and first asked if we'd seen a dog. He'd obviously lost his when it went chasing after another group. He then asked if we knew anything about the buried skier. A skier on Corn biscuit was caught in a slide triggered by a friend above. We learned later through the online forums that she was removed, 5-6' under, hypothermic, but able to ski out in the dark. We all felt a little better about spending the day on Magnum suffice to say, and for a newbie like me, much better about having some wise friends to ride with.
Posted by Dante at 9:49 PM

Sounds awesome. I can't imagine hiking up just to ski back down. Conditions here have been decent, followed by a day of rain. Nowhere near as dramatic.

It looks like your ski adventure was way more fun than mine...I hit up the local mt on Sunday, had frostbitten fingers in an hour, and could only see 10 feet in front of me because of the snowmaking operations...We're desperate for a good dump here, all we got last week was 9"...

homeward bound for the holidays?