Going to prison, making multiple visits to the hospital and getting called a tool; It's all in a weeks work

One of the longer titles for a post, but that about sums up my week.
I've been working on what will be a multi part series on methamphetamine use and abuse on the peninsula for the past several weeks, and one of the segments I wanted to incorporate was the perspective of an addict that landed in jail. That meant going on the Inside.
On Tuesday, Scott, the Clarion's photographer and I went over to Wildwood, the medium security prison outside of Kenai to do an interview with an inmate that grew up on the peninsula and got a little too deep.
The interview went very well, and I look forward to getting that story out. The awkward part came at the end. We held the interview in a visiting room locked on both sides under the surveillance of a quiet though friendly guard. It turned out that my timing was poor, the prison was doing "count," which I assume would be what it sounds to be, when I finished.
Well, we had to sit tight in the room with the interviewee through that time. After a fairly long interview, I was pretty tired, and though I suppose I could have tried to dig at some other issues, I was pretty satisfied with what I had.
So how do you make small talk with someone on the Inside?
Let me say, it's as tough as it sounds. We talked a little bit about hunting, fishing and such, but as we got into it, I could see the longing in the interviewee's eyes to not just have to talk about it, and quickly realized it was a less than ideal subject. The weather, well, they don't call it the Inside for nothing, again, not a great subject. So instead, we mostly sat quietly, locked up for the time being.
Though the interview went well, the feeling of being locked down is one I could do without.

Ok, so experience two, getting called a tool.
The hospital, in an effort to deal with the situation, hired a professional crisis management consulting firm to assist in its recovery. They now have a very friendly PR consultant working for them. Though she doesn't actually do the direct communication, it was clear within a few seconds of sitting down with the hospital's actual PR person and their consultant, who's actually doing the talking.
A few folks at the hospital were very peeved about a story run Tuesday by my colleague Phil on the Chief of the Soldotna Police's account of the events lasts Thursday. This apparently did not match up entirely with what the hospital has found. The hospital however, has thus far released almost nothing in terms of information other than the original statements.
As a result, we are being forced to go elsewhere for information, regardless. I think, by reading the comments below the article, it's pretty clear that there's a community hungry for information, and at the rate the hospital is providing it, they're going to starve...
That being said, the hospital is adamant about letting us know that they're going to release information as expediently as possible at every opportunity they get, though little has come about, and they plan to let all employees go over any release before its submitted to the press, right, expediently...
So, with that in mind, in my very cordial visit with the hospitals PR person and the hired consultant, the consultant informed me not once, but twice, that:
"Dante, to us, you a tool, to communicate with the community."
Oh really, why thank you!
I had to work so hard to keep it together, honestly I didn't do a great job either. I don't play poker for a reason.
I realize that the word tool certainly wasn't meant in the derogatory sense, though with the pause and emphasis, I wish I'd recorded it.
Nonetheless, for someone who's getting paid the big bucks to work communications, one word here, diction. I can think of a couple alternatives and perhaps more delicately phrased ways of saying, "You're a tool."
My co-workers back at the office got a kick out of that. Mike said he was glad this consultant said what everyone was thinking anyway, haha. That's one of the best parts or working at small paper run by a bunch of smart ass cynics. No matter how bad you get trashed in the field or online, you'll always get it worse back in the office, hahaha.

Alright, did I say I can't wait for this weekend? If the suby doesn't fair too bad in her check up today I think I'll be chasing bird in a few hours, and if Prince William doesn't have a tantrum in Turny destabilizing the slopes, maybe I'll get on the fat plank and cut some lines on Saturday! 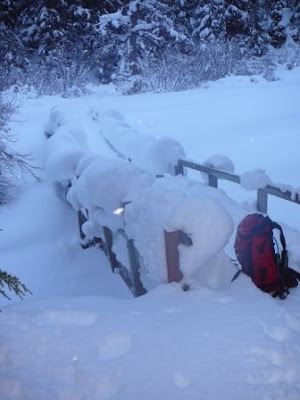 Last Saturday I hiked into the Upper Russian Lake Trail looking for birds. There's about two feet of snow. I only flushed three. The first nearly nailed me in the face, and as I went to pursue it off trail I fell waist deep in a spruce trap. The second two stayed high in the canopy and I couldn't line up a shot. The trail has at least been broken now by some back packers pulling sleds meaning it should be hot on the classic skis. 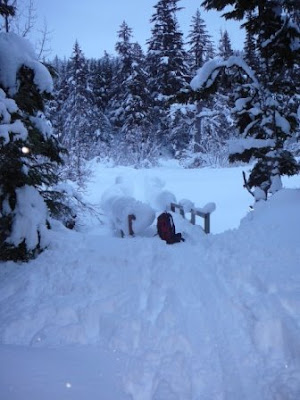 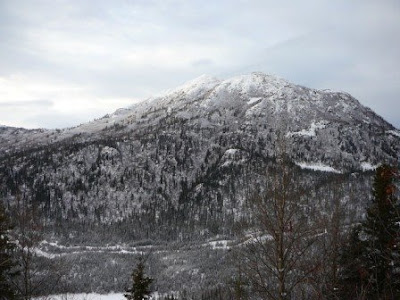 Friday I hiked up the steep Skyline trail. Warm temps turned the snow to the consistency of buttery mashed potatoes, making the footing less than ideal. Hiking with a loaded gun in such conditions in hardly amusing. Less amusing were the dog tracks from the hiker in front of me. I think 'Fido' flushed most the fowl. 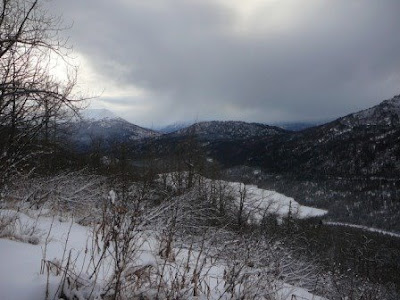 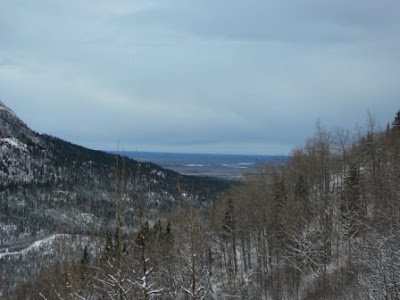 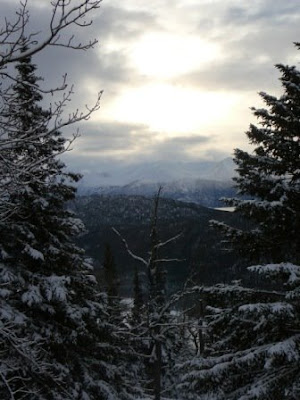 This was Monday's lead art in the Clarion. 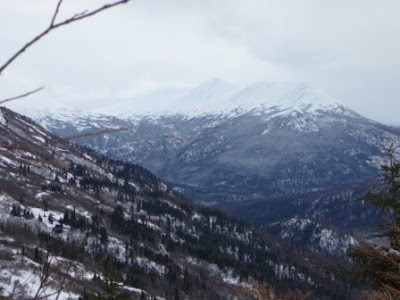 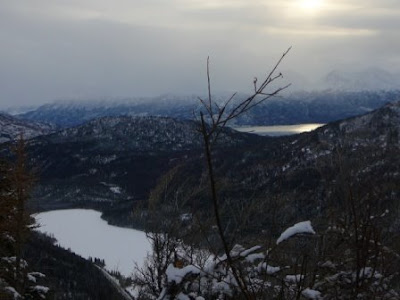 The following scenes were shot Thanksgiving. On my way to Phil's for dinner, I had to pick up some art to go with my story running the following day. The scene was a grim reminder of the events the day prior. 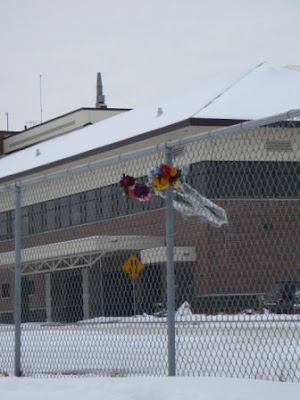 This was Friday the 27th's lead art in the Clarion. The flowers hang above the spot where gunman Joseph Marchetti was shot on Wednesday. 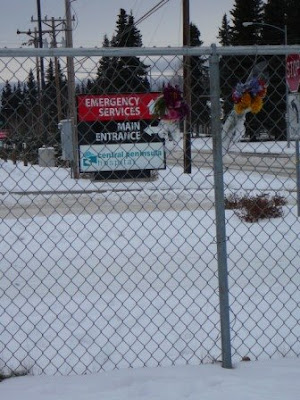 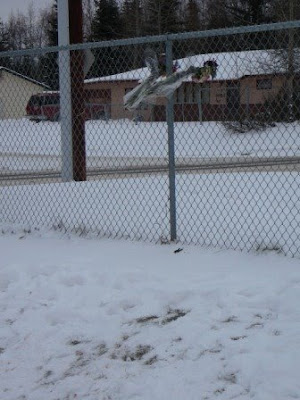 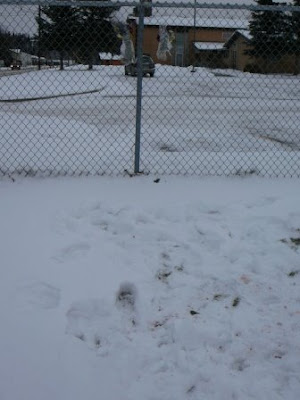 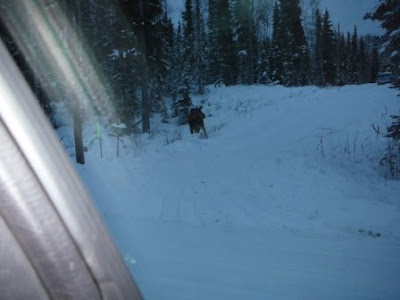 The word "tool" may be used as an insult, describing someone who is being used by an establishment willingly (as a sycophant), or unwillingly (as one who blindly conforms). Alternatively, the insult "tool" can imply that a person is unable (or unwilling) to form an independent opinion on a given topic.

The term most commonly describes someone who is being manipulated by societal institutions. In this context, the term is thought to be a shortening of the phrase "tool of the system". The insult is used in Western counter-culture to describe strong proponents of those institutions, who seem to truly believe in what is thought of as a mass deception.

Tool may also be used to refer to members of the counterculture who conform to a prefabricated concept of rebellious behavior (e.g. tattoos, intentionally ripped clothing, long hair and earrings on males). In this sense, "tool" refers to a person who mindlessly buys into pop culture or subcultural trends.

Gee whiz, thanks Meg! You tool!