Disaster struck in Cook Inlet early Thursday morning, leaving no one injured but 35,000 to 38,000 gallons of diesel trapped within a 166 foot vessel that's now completely submerged beneath sea ice.


The following story is posted online at the Clarion's site.


By JOSEPH ROBERTIA and DANTE PETRI
Peninsula Clarion
The supply vessel that struck the Granite Point oil platform early Thursday morning has submerged out of sight according to reports from the Coast Guard and a spokesperson for the operator of the boat.
Seven people were rescued when the MV Monarch, an Ocean Marine Services Inc. operated boat delivering supplies to the platform, began to sink early Thursday morning. The platform evacuated all nonessential personnel. All personnel aboard the platform and the Monarch are safe and accounted for, according to Chevron Spokeswoman Roxanne Sinz.
The Coast Guard responded to the initial distress call. “We received a report at 5:50 a.m. that the MV Monarch was taking on water,” said Petty Officer Walter Shinn with the U.S. Coast Guard in Juneau.
The 166-foot-long vessel was pushed up against the platform, which is roughly 19 miles north of Nikiski on the west side of Cook Inlet, near Tyonek. According to a statement released by the Department of Environmental Conservation, the Monarch was pinned against the platform by sea ice. Sinz said she was unaware of any structural damage the platform may have sustained from the impact. The Monarch is carrying 35,000-38,000 gallons of diesel. An additional 20,000 gallons of diesel is on the oil platform, Shinn said.
The Coast Guard dispatched a seven-person team from Anchorage to respond to the incident. “A C-130 and H-65 helicopter from Kodiak were also set to respond, but high winds kept them grounded,” Shinn said. A tug is on site and the Coast Guard Cutter Hickory was enroute Thursday afternoon. Petty Officer Sara Francis, a spokesperson for the Coast Guard, said the cutter was due to arrive in the morning and would stand by for further instruction.
Officials do not know what caused the problem, but the Coast Guard was taking action to begin investigation. Jim Butler, spokesperson for OMSI, described the sunken vessel’s submerged condition as “fairly stable.” Since the vessel disappeared its location was no longer known. The inlet is estimated to be 86 feet deep at that location. “We’ll be using sonar to figure out its orientation at first light” Francis said. Earlier in the day Butler described it’s location, saying, “It’s slightly away from the platform to its south.”
A light sheen was reported to be visible on the water around the platform after the initial accident, according to the DEC. “My understanding is that there was some hydraulic oils and some fuel released as it went down but we have had no reports of any persistent sheening around the vessel,” Butler said. Butler said an afternoon flyover revealed no further leakage.
“There was no sign of any debris or any sheen of fuel in the area where the vessel is,” Butler said.
Salvage crews arrived Thursday afternoon to assess the situation. Crews from Global Diving and Salvage along with Chadux are being used for clean up. “I think OMSI has done a real good job activating resources from around the world. We have experts from overseas for underwater salvage coming here,” Butler said. A salvage plan will be devised Friday.
“The salvage crew is assessing the situation and developing a plan with the Coast Guard,” Butler said. Though the vessel is believed to be south of the platform, Chevron had “shut in” the platform, and was removing product from the pipelines that run on its north side. Sinz called these measures precautionary.
Seven workers were still on the rig, after seven were evacuated Thursday morning, with no reported injuries. 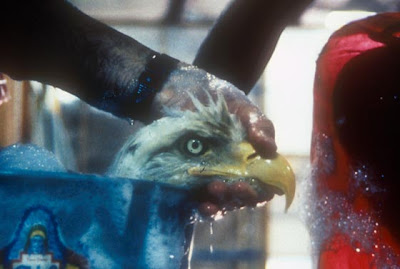 A Bald Eagle is washed in Prince William Sound after the Exxon Valdez tanker dumped over 11 million gallons of crude oil into the sea in March of 1989. The incident in Cook Inlet comes 19 years and ten months on the heels of the biggest oil spill in U.S. history. The MV Monarch is only carrying 35,000 to 38,000 gallons of diesel, still trapped within it, an amount that pales when compared to the E.V. The inlet's massive tide fluctuations paired with the the buoyancy of the any petroleum product means a spill could still have disastrous results for the surrounding communities. Photo from the International Bird Rescue Research Center

This was one of the stories that kept me at work for ten hours today. As a result I'm going to leave it at this:
It will be a bit hard to sleep tonight as I think about a boat full of oil knocking around in tides that are fluctuating by 30 feet at the bottom of one of the wildest seas in the world.
While the hull seems unlikely to crack and spill any more volatile cargo tonight; how it will ultimately be extricated remains to be seen.
Ironically, Governor Palin filed suit today against the Federal Government for listing the Cook Inlet Beluga under the Endangered Species Act, citing that doing so could negatively impact the Cook Inlet Economy.
This could be true.
An oil spill would also negatively impact the inlet economy too. Additionally it would negatively impact the marine ecosystems of the inlet and diminish the quality of life for all of its residents.
This seems like a real worthy cause Palin, keep it up.
Posted by Dante at 9:03 PM