Staring down my gunsite, I looked down the trail at what appeared to be a deformed arachnid, the size of a small dog, squatting 250 feet off.
I slowly brought the gun back down, thinking, “There’s no way that’s what I think it is.”
I kept my stare fixed on the hard blue ice covering the path in slippery sheets as I quickened my pace.
I’d waited, perhaps since I was five years old, first convinced the glacial erratics covering the hills behind my house were actually dinosaur bones, to find a woodland treasure like the one I hoped lay in front of me.
The temptation to peer up and look ahead strained the muscles in my neck, but I feared in doing so, I’d confirm that the object was in fact just a large branch or even litter.
Finally, within 30 feet, I couldn’t wait anymore, and my head snapped up.
There before me sat a fresh moose antler shed. 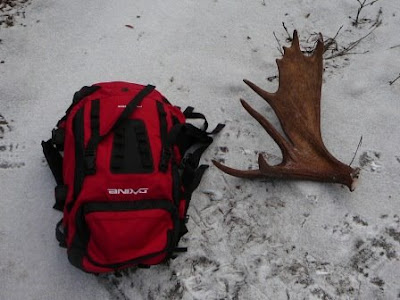 Just pulled from the ice

I could hardly believe my eyes and practically slid the remaining distance.
I’ve always wanted to find a set of antlers out on a trail or a bushwhack.
Given the miles I’ve covered, on and off trail, I can’t believe that it’s taken this long to have finally found one.
I couldn’t believe my luck either.
I was only a quarter mile down a side trail that juts off a very popular trail.
“How is it that no one could have happened across this great find until now,” I thought?
I couldn’t say exactly when the mid-sized bull had dropped the horn, it had just frozen back into the trail, but maybe they came off in late December and were buried in the storm that rolled through then.
The moose was at a point in its life, where prone to many perils, legal hunting was not one of them.
Hunter in the game units here may only take spike forks, usually two year-olds, or trophy moose with racks over 50.”
Joe reckoned this one was in the 40” range.
After popping the antlers from the ice, I held them up to the dim sky and marveled at their walnut color and deep ridges.
There wasn’t a single blemish on them, no chew marks from rodents or birds.
Holding the single antler up, I immediately found a new respect for the animal that had once toted them through the thick boreal forests and falling snow.
It must have weighed 20 pounds at least, I estimated.
Covered in snow, ice or tangled in brush, I could see them getting old fast.
Throwing them on my pack, I couldn’t contain the grin on my face.
I could come back from the hunt/hike empty handed, which, would in fact be the case, but already the trip was a success.
If that wasn’t enough, working my way through the dead matted grasses on the shore of a remote pond a little while later, I stumbled over a buried object.
For whatever reason, though hundreds of logs littered the shore, and I assumed it was nothing else, I glanced down.
To my surprise, I saw the top knobs protruding from the palm of another shed poking a few inches above the vegetation. 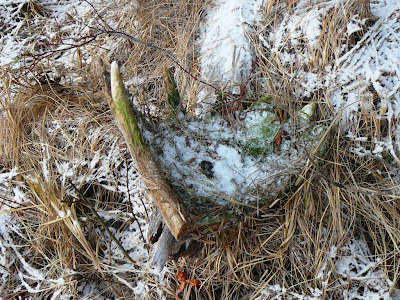 The second shed I found may not have even been a shed, it almost looked cut on one side.

All these years of hoping to find a set of antlers, and in one day I tripped over two; unbelievable.
The second set was much older, bleached white and had moss growing on its underside.
It was also either split or cut so only the palms were still there.
I set them back down. The other shed was weighing me down enough and this one was well on its way of returning to the soil. 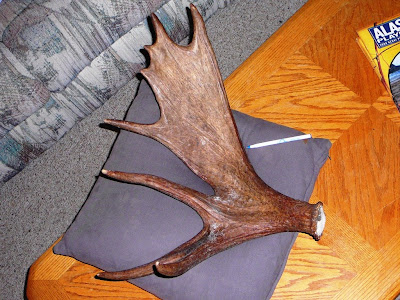 Inside and warmed up, I added a pen for perspective. This is a larger image and may be viewed in detail if clicked on. 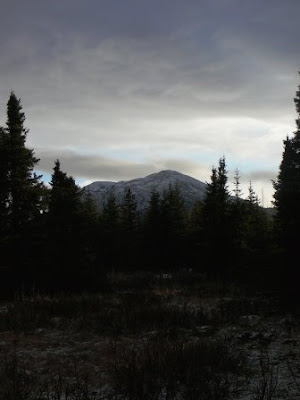 October recollections. East of Sterling the snowpack thins to nothing other than what fell in a recent dusting, reminding me of late October and early November in these parts. Fortunately a cold spell is continuing to firm up land and lake. 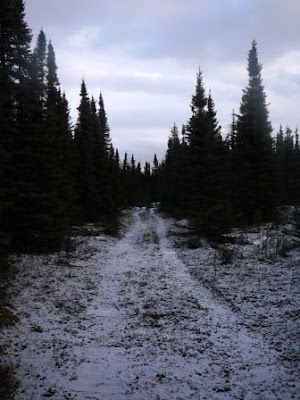 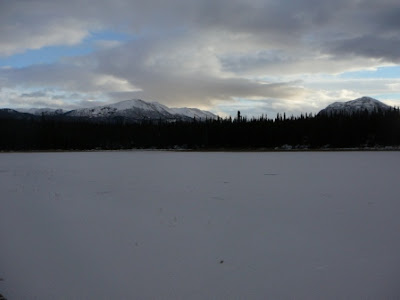 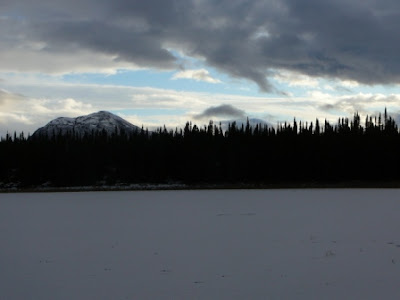 Be sure to follow the Clarion online this week for coverage of Redoubt Volcano. The peak was upped to "watch" and scientists at the Alaska Volcano Observatory in Anchorage are monitoring it 24/7 after a the volcano suddenly started showing signs of life early Sunday morning. Presuming Redoubt doesn't give me reason to act sooner, there will be an update in Wednesday's paper.
Continuing on the geological fix, I was rattled awake along with other late sleepers Saturday morning when a large 5.7 quake centered near the mouth of Cook Inlet shook southcentral. Read about it here in the ADN.
Exciting stuff happening here these days.
Lastly I shot this closing image at 6 p.m. this evening before heading out onto the trails. That's right, twilight at 6! We are at 7.5 hours of light sunrise to sunset by mid-week here, and gaining over four minutes everyday. My headlamp will soon be relegated to the pack. Snow conditions on the trails, though thin, are phenomenally fast right now. I plan to take my GPS out Tuesday and do some sprints. I can estimate the speeds I'm traveling on flat ground right now, they're comparable to sprinting on a road bike I think, but I'd like to confirm them first. 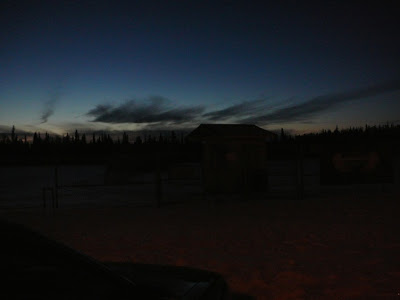