I just heard myself on CNN.com

I checked my email this morning to see I had an email from CNN, and not long after getting into the office my phone rang with an editor from CNN Radio on the other end eager to learn more about our ancy volcano.
Let me rewind here real quick.
On Sunday morning a fax came in from the Alaska Volcano Center in Anchorage warning that Mt Redoubt, the 10,097' peak about 50 miles west of Kenai, had been moved from aviation code Yellow to Orange, while staff at AVO went on a 24 hour watch. 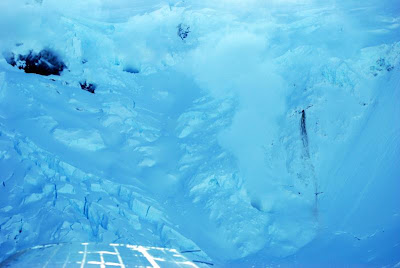 Upper part of the north flank of Redoubt showing fumaroles issuing from the ice/snow-covered 1990 lava dome that sits in the summit crater; and the large collapse hole at the base of the ice fall portion of Drift Glacier. Picture Date: January 25, 2009 13:15:00 akst Image Creator: Bleick, Heather Image courtesy of AVO/USGS
The peak first showed signs of life in November when the observatory moved it's aviation code to yellow. 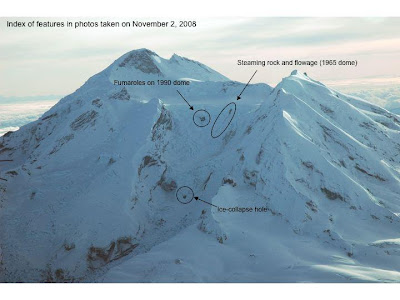 Index of features shown in photos taken on November 2, 2008 at Redoubt Volcano. Picture Date: November 02, 2008 13:09:00 AST Image Creator: McGimsey, GameImage courtesy of AVO/USGS.
Then Sunday morning the peak rumbled back to life with an intense period of seismic (earthquake) activity.
While no one would have known on this side of the inlet, it was more than enough to alarm the scientists at AVO.
Since then the peak as calmed down, though AVO continues to report the peak's seismic activity is well above background levels.
The peak's appeared awakening is right on schedule. Redoubt last eruption series started on Dec. 14, 1989 and continued through April of 1990.
While that was the first eruption series for the peak recorded on the scientific record, the peak has had a tendency to erupt on a 20-30 year schedule.
So here we are.
There are in fact two theories as to what's going on below right now, but it seems the weight is being put on a likelihood that there will be another eruption in the very near future.
The initial warning issued by AVO was that it could occur in a matter of hours to days.
Now it's at days.
So this brings me back to today.
The Lower seems to have finally got word of the pending eruption, and CNN was looking to generate copy this morning.
After getting the go ahead from my publisher, I called CNN Radio back up and did a 10 minute recorded interview. 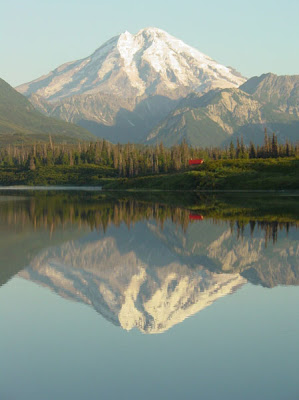 The Redoubt so many in the area know, though perhaps not from this angle. The peak is a striking landmark across the inlet on clear days. Here, Redoubt is seen from the remote Bear Lake, 35 km east of the volcano on the wild and unpopulated West Side of the Inlet. Picture Date: August 11, 2005 16:39:04 AST Image Creator: Wallace, K. L. Image Courtesy of USGS/AVO
CNN was chiefly interested in finding out how folks were handling the possible eruption up here.
I explained that as an organization, we were encouraging everyone to prepare for an eruption and get all the supplies necessary, from the usual food, water and extra medications, to specifics for an eruption like surgical masks and extra air filters for vehicles.
There was a bit of confusion I think about what kind of eruption Redoubt is likely to produce as I was also asked about evacuation plans.
At the moment, the expectation is that the eruption could generate ashfall, and dependent upon wind directions, that could mean the Kenai will get coated.
Conversely, it could just be a beautiful spectacle, or not visible at all is we're socked in per usual.
Redoubt erupts by building up hardend lava domes with gooey centers near its summit and then shattering them in ahsfilled eruptions.
There won't be glowing lava flows pouring down the mountain's flanks, and Mount St. Hellens drama is not anticipated.
Evacuation is somewhat of an ironic idea all together as we're on a peninsula here, and with only one road on or off, it never takes travelers far from the center of the eruption so there's not many places to go. 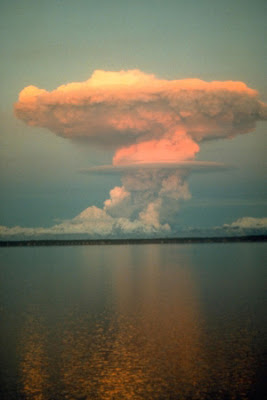 Ascending eruption cloud from Redoubt Volcano and its reflection in the waters of Cook Inlet. View is to the west from the Kenai Peninsula. Photograph by J. Warren, April 21, 1990. Picture Date: April 21, 1990 Image Creator: Warren, J. Image courtesy of USGS/AVO
Otherwise, most people it seems are going about their lives as usual with a bit of caution.
There was a notable, though untraceable scare Monday afternoon.
Possibly clouds lifting off the inlet and a setting sun spurred a few anxious individuals to mistake a wisp of cloud for an eruption, though a glace at pictures from the 89-90 eruption easily shows how hard it would be to confuse the two.
Nonetheless, a heap of false eruption reports piled into the newsroom while AVO reported getting inudated with calls asking if the peak had blown its lid Monday evening.
Similar episodes have occurred since.
All the same, save for a few folks who seem to have nothing better to do than overreact, everything is going on as usual.
On a personal note, I certainly hope the weather doesn't hold a grudge on us when the peak erupts, but if it does I'll have to deal with it like everyone else.
The chief priority will be ensuring that I'm someplace safe, either at work or the lodge, and once there, that I'll probably be staying put to avoid damaging my lungs or vehicle with ash.
The lodge is well stocked with easily prepared high calorie food, water, and portable fuel for cooking and heating if necessary.
Keep up with Redoubt's latest developments online at the Clarion or AVO.
Another, less harmful atmospheric particle fell Wednesday and Thursday delivering about 6" to Sterling and I'm sure more to Turny.
Near 0 lows and clear skies paired with increased daylight should make Turny an excellent place to be on Saturday. After such a long week I'm really looking forward to it.
Posted by Dante at 8:55 PM

Hey... you forgot to give us the link to the CNN piece!