A few times I've found myself reporting in the midst of passion and emotion, knowing that irregardless of how charged the air around me might be, my job was simply to turn a real event into a script of words on a page.
On Tuesday, the 44th president of the U.S. took the oath of office, ushering in a new era in American History.
In the little town of Kenai, Alaska, more than 200 swarmed into the confines of a community center to watch the day's ceremonies, recorded some ten hours prior.
In such a conservative area I, and the event's organizers, expected a showing of 50-60 people. I certainly expected a bit of emotion, but otherwise it seemed that the gathering would largely be a medium for local Dems to discuss future plans and opportunities.
As the meeting was to take place, local union bus drivers were deciding whether to trade in their keys for picket signs early the next morning, likely leaving dozens if not hundreds of district students stranded or unable to reach school.
Such an event had my full attention, and I was unprepared to give what had originally only been expected to be a small get together the fullest coverage I would have liked to provide.
I came to this realization, as I kneeled in the grip of the first person I'd met, for whom the election was more than a mere matter of politics.
With "Air and Simple Gifts" playing in the background, Lou Dodson-Lankard squeezed my wrist and explained to me, in a manner far more eloquent than I imagine I could have done if I had the entire day to write the story, why she knew that a person like Barack Obama would one day lead the nation.
I struggled, in that moment, to hold my own emotions within, I think, not simply because of the power and wisdom offered in her answer, but also because I knew it was one of those moments that comes along every so often in this profession, that leaves me realizing my own limits to capture a situation in print.
I held my digital recorder in my left hand capturing her short dialog that evening however. It's a decision I am eternally grateful for.
Vince and Scott at the paper reworked the digital file and uploaded it to the Clarion's homepage and the accompanying story.
I invite you to take a listen here, the flash player is located at the bottom of the article. 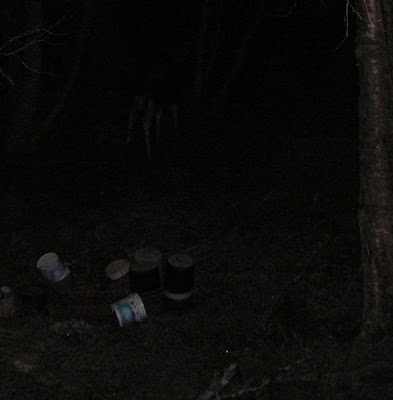 Here's a moose's butt, at night, haha, sorry, he gave me quite a fright the other night when he started running around the yard just after I stepped out of my car. This is the little fella that's been sleeping under the deck on occasion. He's a yearling and very small. Later that evening he woke me browsing outside my window in the yard.
Posted by Dante at 9:51 PM