Keeping in line with a summer that went on record as second coldest since state records were first kept, South-central is locked into what will likely be its third longest cold-snap in history.
Anchoragites are whining (good read on anchor town's deep freeze) about temperatures that have generally stayed on the better side of 20 below, while the interior has seen a temps dive as far off the deep end as 65 below.
Those crazy fools in the center of the state already live a few moose hairs from clinical insanity I've been told, so the deep freeze and long dark days have less of an impact up there than it does down this way.
The central peninsula has seen its typical variation of temperatures. At work in Kenai temps are usually a good 15 degrees warmer than they are out here in the Sterling, though they've stayed on the negative side of 0 for well over a week.
In Sterling on Saturday morning, when winter took its middle finger and shoved it onto the button of disaster, temperatures were 34 below in the driveway at 10 in the morning. The last few morning have all been in the low -30's.
I'd planned to make an escape to the ski trails in Homer, where Kachemak Bay and the gusty Gulf of Alaska has kept temperatures anywhere from a few degrees below to a balmy 15 above.
Unfortunately, I spent both days crawling around under the lodge and getting the preliminary stages of frostbite trying to revive my vehicle.
The lodge went first on Thursday.
Ice formed somewhere in the water line, freezing the entire mainline 200 something feet back up the the well.
A welder had to send a line up the pipe to break it loose.
Things seemed to be going well through Friday morning.
Joe and I crawled down beneath the lodge and spent several hours rewrapping the lines with 85 feet of electric pipe heating strips and foam insulation.
Satisfied with how tight everything looked, Joe went back up while I cleaned up the old insulation and heating strips.
Not more than a second after I heard the door close did he start hollering, "We're froze up again!"
With the strips plugged in and hot, I highly doubted this.
Upon inspection I found the the water coming out at a low stream, and unable to reach the upstairs bathroom. We'd lost pressure, but not water altogether.
Ken, our handy man came over and determined the gauge that calls for water to fill the water tank had gone and we were relying soley on a well pump.
The following day he installed a new one, and for a few hours it looked like things might be back to normal.
Alas, the pressure went again, and to shorten what ended up being a very educational experience in learning how a home water system works, it was finally determined by Sunday evening, that the water tank had ice in it.
Later that night a friend brought over a diesel fueled bullet heater, what appears, and essenially operated like a small jet engine, that produces several thousand btu's an hour.
We blasted the crawl space up to an outrageous 120 degrees, restoring the waterlines.
Since, the kitchen sink has never been shut off unless another water sucking appliance is in use.
Saturday's intense cold took a second victim too.
Since October everyone from my parents and coworkers to friends from both Inside and Outside, have asked, will you have to plug your car in this winter?
I will now say, yes; and no, unfortunately it's not because I've converted the car into a plug-in hybrid.
In Saturday's -34 degrees air, my oil turned to the consistency of peanut butter, and even when hooked to Joe's massive 10 cylinder powered F-350, the suby couldn't be brought to life.
Aside from trying to jump the car, I even crawled around under the engine compartment ineffectually trying to warm the oil back to a slightly more viscous consistency with a fireball throwing torch.
I called one of the only shops open in town, and was able to secure a block heater for installation, but had to rope the little black wagon to Joe's truck and drag it in.
Sitting in the unheated compartment working the brake and making sure the car stayed in the lane on the straight drive into town, I lost feeling in the sole of my left foot, and have the early stages of frostbite on the tip of my left hand's ring finger. Fortunately the damages were slight, largely unnoticeable visually and feels like I slammed the finger in a doorway, just, very precisely.
I immediately went to a nearby Chinese buffet and slurped down a bowl of piping hot, msg laden I'm sure, hot and sour soup. At least I still have my foot!

Knock on wood, things appear to be back to normal for the moment.
Wow, I expected this to be a shorter post considering the lack of art. I planned originally to post some data on weather norms here to highlight both the similarities and extreme differences it has to the climate back in Middlebury Vt, but it looks like I can save that for Thursday's post. 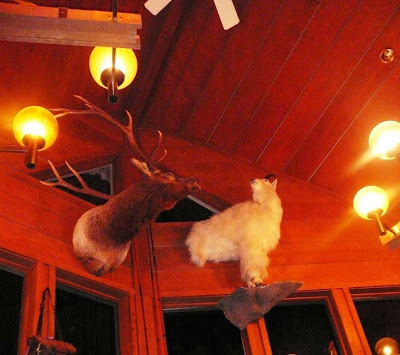 The weekend wasn't a total loss, in fact, much was accomplished, just, in less than ideal conditions. One favorable outcome was the addition of a Dall sheep to the several dozen mounts that adorn the walls of the lodge.

While I was unable to get out on skis all weekend, I went for a long, satisfying and surprisingly fast classic ski along the moonlit trails in the sub 20 degree temps tonight. I was at first mislead as I thought I would be skiing at -12, possibly having the warmest ski here since before I left, but a more accurate thermometer later told me my starting temp was -18 and ending temp was -21.
The true low is found in an area I call the wolverine valley, a sheltered low spot that holds air significantly colder than on the trails above. I stayed out of the valley except for two quick dips on trails that drop in and out of it. I imagine temperatures can be up to 10 degrees colder in the valley based on how hard the frost bites my face (my contacts started to freeze, lets leave it at 'that cold...' but that's another story).
I did see one other couple, the only other crazies out there this evening, and on skate skis no less!
I imagine they did a short loop on the tacky snow as they weren't there when I started, and left when I did.
I seem to have mastered my layering in these temps though and remain comfortable if not on the verge of too warm, even through the icy 10 minute warm-up. 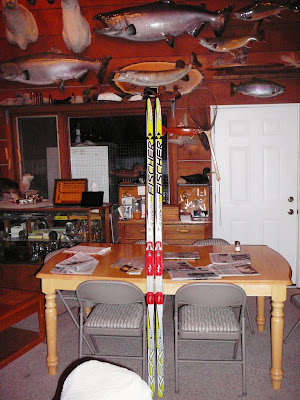 Hot skis for cold snow. The classic wax based skis get to come in and warm up each night so I can properly lay down kick-wax on them in the morning before work. I look forward to getting back on skate skis, but the speedy RCR classics have proven themselves in the track over the last week after an initial dislike.
Posted by Dante at 9:02 PM