Over the last few weeks I’ve been failing to deliver here on the Trail.
While word has spread in the real world, thus far, the virtual world has mostly been deprived of the most recent and I would say biggest development in my life since I moved here.
Two weekends ago on my drive back from splitboarding in the pass with Josh, I was officially offered a position as a technical editor with an engineering and consulting firm in their Anchorage office.
The job offer, which I accepted, was not by any stretch out of the blue.
With some help from two relatives in the City of Brotherly Love, I’ve been in the back and forth process with the company for the better part of the last three weeks.
That all ended last Saturday, and this Saturday I will be in Anchorage looking for a new place to live.
The new job starts on Monday, my final day at the Clarion is Thursday.
Everything seems to be developing at the speed of sound, almost literally, which, after all this time, is both welcome and overwhelming.
I’m ripe here for some long winded reflections, and the thoughts are many on what’s ahead and what I’m leaving behind.
In little flashes, I’m reminded that the things that I’ve been doing on a regular basis for the last 2 years and change are all about to end, whether it’s the long sunrise commute to work, the views of volcanoes directly across the inlet I’ve enjoyed on my road bike rides or the daily ventures on the ski trails I know like the back of my hand.
It’s hard to say what I will miss most. There are so many things, and so many people, I dare not venture to say in public what or who they would be.
But I know for a fact that the quiet I’ve found after long days in the office on the starlit ski trails is certainly up there, and as of late, with all that’s going on, my after work skis have been all the more bittersweet.
As I’ve skated around in the dark these past few nights, John Cougar Mellancamp’s, “Small Town,” keeps playing in my head.


This past weekend I synced up with Jack and crew on Tincan. Visibility was nil, but the snow was sweet. 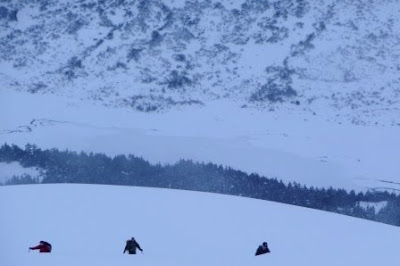 After making one run "on my own" in the company of a not oversized Friday crowd on the upperbowl, Jack and Crew emerged from the trees for their 4th lap I think. From the top, two of Jack's friends descended back to the car, while Jack and I did one more, making it back to the cars with not much daylight left to spare. 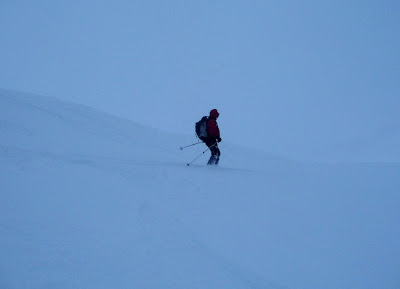 The peninsula, lacking your craft and hard work every day, will be a much lesser place. Tourists put high value on having their fish cleaned promptly and properly. And Tsalteshi skiers appreciate a well-groomed trail. I'm sure there are other things you brought to the area, but those are the two that stick out in my mind.

I was in Safeway tonight and "Small Town" was playing on the Muzak. Couldn't help but think of this post. You sure Tsalteshi didn't install Muzak?

Peninsula's loss will be Anchorage's gain.