Josh O (LINK) and I hit Tincan on Saturday on the fat boards, marking the official first turns of the season for yours truly.
A big storm has walloped the Peninsula since late Friday, dumping heaps of snow even here in the normally skimpily covered lowlands of the Central Pen.
Based on a trip I made two years ago to Carter Lake about this time of year after a nice white gift from the Prince (LINK), tele-Pete's Friday report that Summit Pass was rocking two feet at the highway and finally snowtel gauge reports, I wanted to get some turns at Carter before the area opens to sled heads.
We launched from Sterling around 9, but the sky was falling, and the drive between Sterling and Cooper Landing was the worst I've seen it. The pavement was nowhere in sight and sometimes it was hard to tell if we were even in the right lane. Fortunately we were the only people dumb enough to be out driving so there were few knuckleheads to contend with.
When we finally made it Tern Lake, the weather had lightened up some, and we could see Carter probably wasn't going to go. There was less than a foot at the road at the junction of the Sterling and Seward, and looking up the flanks of the nearby peak, the cover looked too thin.
We decided to head for Tincan, where knee deep snow was reported on Friday.
Tincan, along with being an early season mecca, offers some of the only tree skiing around, which is key when visibility is lousy.
Somewhere between Summit Pass and Hope Junction the snow turned to rain, and continued even as we climbed into Turnagain Pass.
Undaunted, we pulled into the Tincan lot which was, as expected, overflowing with every kind of snow enthusiast.
Making our way through the crowds and the freeze line, we soon found improving snow quality.
While visibility made it seem unworthy our effort to climb to the top of the bowl, AK Jack reported even better snow up high.
We were happy to make three tree runs, working our way progressively north, in snow that was at least mid-thigh deep or better.
What a way to start the season. 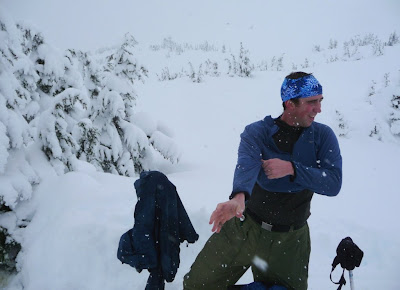 Josh prepares for the first descent of the day as snow continues to fall in earnest. 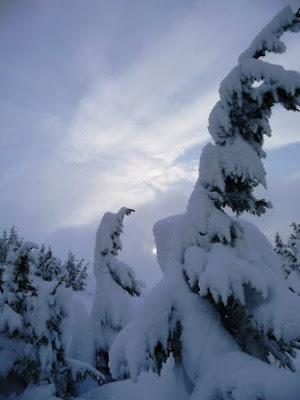 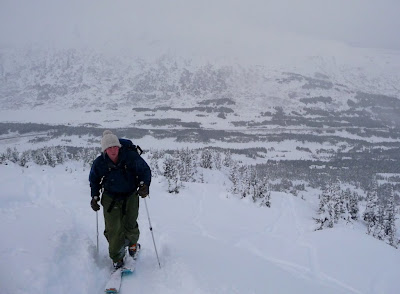