Winter on the river

Clarion photog extraordinaire, Scott, and I hit the upper-middle of the Kenai River today with Tony Eskelin, a sport fish bio with Fish and Game in Soldotna, to look for some of the rainbow trout Tony has tagged with radio transmitters.
This is part of an ongoing department study to follow where there fish are moving through the year as they feast on salmon, hunker down through the winters and spawn in the spring.
I've seen Tony working more than few times this year, as well as other Fish and Game bios out tracking the kings that were tagged as part of a separate study, so it was pretty cool to head out on the boat and hunt down some of the fish.
The method Tony is using is similar to one I saw employed by the department in another study (LINK) they were conducting on invasive northern pike in a lake in the northern Peninsula I wrote about last February (ARTICLE).
Despite a forecast that called for the Kenai to get railed by a surly storm said to be packing a wet and warm punch, temps were pretty reasonable with calm winds and even a few peaks of sun, making for a pretty nice day out on the water. 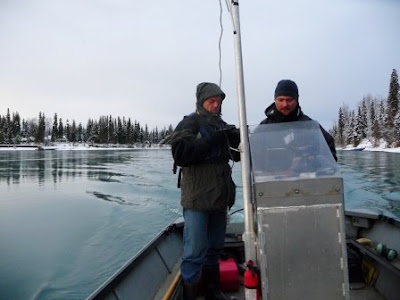 Scott looks on while Tony hones in on a tagged fish. 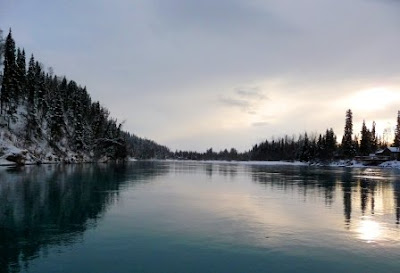 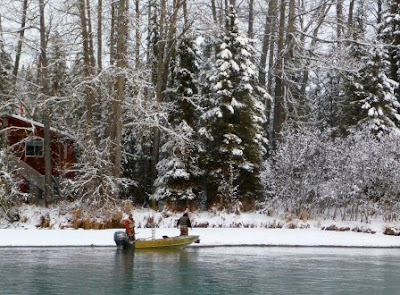 A few hardy anglers are still out working the waters. 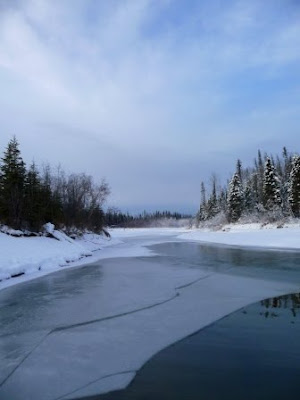 Looking up the now iced over Lower Killey.
Posted by Dante at 10:51 PM