Annie and I rented Juneau Lake Cabin on the south end of Resurrection Pass Trail this weekend. We hiked in on the Bean Creek Trail on Saturday, relieved to find the skies mostly sunny after driving through all kinds of precipitation from Los Anchorage.﻿
The trail had a thin covering of snow on it, well packed down by other hikers, and more recently, a pack of wolves that had come through in the morning. 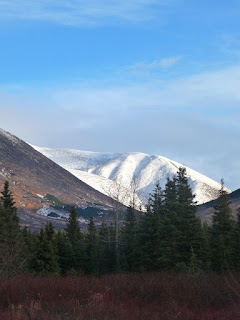 I don't spend much time scoping out the cabins on the various trails I ride in the summer, even though I ride by them often. There are only a few I might swing by to get to a nice break spot, but even then, if they have guests I will try and steer clear. I know I've been in Juneau Lake Cabin before when friends have had it rented, and its southwest-facing exposure makes it a nice place to get some sun, but in my mind it wasn't quite as nice as it turned out to be.


Most of the Forest Service cabins have wood stoves. This is a nice amenity for sure, but as one could guess, results in the areas surrounding the cabins getting pretty well picked over for dead wood, and a few idiots taking down live wood. With Juneau Lake frozen solid, we headed across to the far shore and immediately found a perfect-sized dead spruce.

A party that stayed in the cabin a few days earlier wrote in the cabin register of hearing the wolves at night during their stay. We heard the wolves on the hike in, which seemed odd given it was the middle of the day, but a treat nonetheless. Other sign they left along the trail besides tracks indicated they were well fed on hare.


The cabin stoves are small, so it's important not to get lazy and cut the logs too big, or they won't fit, and any effort to reduce the number of cuts made will be lost. 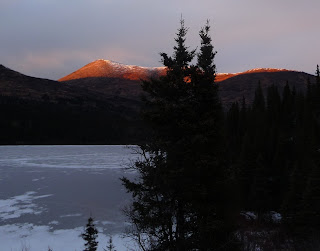 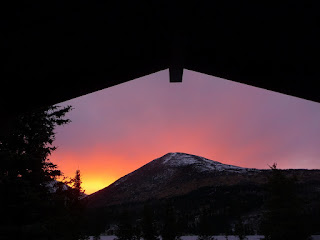 While we cut wood we saw someone run by on the trail below us. Shocked that someone would be out running this far so late, or feel the need to go for a run after hiking, I quipped they ought to come help chop wood. The runner proceeded to head up the stairs toward the cabin, somewhat to my disbelief. Then I realized it was Mi Ke. A big crew from Soldotna and Homer were staying at Trout Lake, about 3 miles south of us. We were a bit ahead of them on the way in, but Mike wanted to tell me that he had parked me in, and where his key was stashed. That was awfully nice of him to run that far just to tell me, though I pointed out he could have just put a note in my car since it wasn't locked. Haha. He also told us we should come over for dinner, but with all our wood chopped, and wolves and brown bears running around, a night in seemed much better! 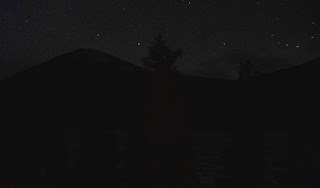 Sunday dawned cloudless, but quite comfortable. Temps felt like they never dipped below the low 20s. 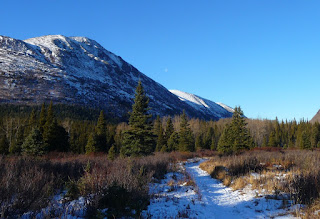 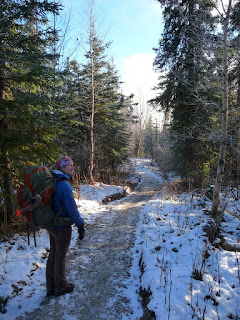