On Friday, Dan, Mike, and I dawn-patrolled, en route to Pastoral. We broke trail up Taylor Creek Valley through a cold and heavy freezing fog that iced up everything it touched.
We encountered settlement almost every step of the way. As the valley walls closed in, we became more and more unnerved by the fact that one step was on a hard slab, and the next went through a foot or less of airy snow to tundra or rock. At the base of Taylor Creek Pass the clouds had lifted giving us a look at what was ahead. While the pass slid a few weeks ago, offering some assurance that weak layers had ripped out, I was more concerned with what was on the east side of the pass. The east side of Taylor Creek Pass is notoriously wind-hammered, and hollow even in later season under a full winter's snow load. Better yet, below the pass is a cereal bowl-like depression, waiting to collect snow and human marshmallow lucky charms.
Between these thoughts and the realization that we'd be lucky to score two runs on Pastoral before having to exit, we high-tailed it back down the valley, broke a skinner to the ridge line, and never looked back.
We found consistent snow, generally knee deep from Sunburst's ridgeline to the Taylor Creek valley floor. Though it was still possible to find tundra and rocks, we avoided the latter all day. 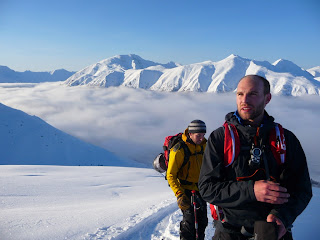 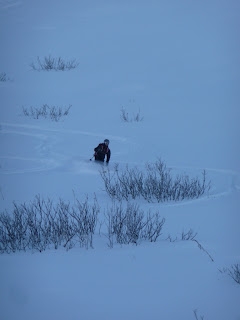 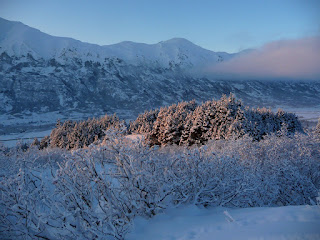 We enjoyed little competition on Sunburst on Friday, a rare treat this time of year. I knew such luck would not abound on Saturday though, so Jack and I hatched a plan to use Sunburst's access to go to Magnum.
Magnum, next door to Sunburst, is choked off below by alders, and does not have an early season trail cut to it like Tin Can and Sunburst, but we planned to cross over.

As we entered Taylor Creek Valley, the morning light still dim, and obscured by light snow and clouds, we saw a large slide in the back of the valley about a half-mile from Taylor Creek Pass. It was hard to judge its true scale, but from a distance we could see it moved the entire shallow snow pack from the ridgeline to nearly the valley floor. Since I didn't see this when I had left Friday evening, it was particularly frightening. No major weather had come through that night, and I couldn't remember seeing anyone back there when we left, so I assumed this had ripped randomly over night.

Operating under the assumption this slide had gone naturally, we went into high alert. I was particularly concerned given that 24 hours ago we had walked under the base of this slide. We discussed whether our passage the day before had triggered the slide. Only later did I learn it was triggered either remotely by a skier, or as a result of a skier breaking a chunk of cornice (our early start meant I missed seeing the observation report online before I left Saturday morning). While both still are cause for red flags, they are less concerning then a random natural.
We crossed over to Magnum, but as we headed up it's northwest ridge, we quickly found ourselves on a hollow slab. We new as well we were ultimately en route for an aspect identical to what had slid on Sunburst.
We backed off and skied a short run into the alders. The snow was nice, but the alders choked out fast.
Back on the hollow shoulder, Jack dug a pit. We found about 3-4 feet of wind slab sitting on 6-12 inches of air over tundra. Not good. It took about a dozen elbow taps to get it to go, but it was clear if it did, it would move fast and far. 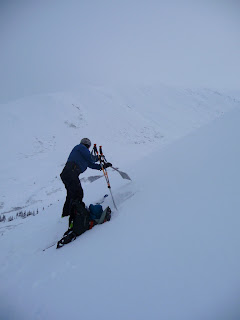 As we dropped back down into the alders to see if we could suss out an alley, we noticed a massive party on Sunburst (at least 10 people in one group) had decided to cross over and join us. I'm getting tired of seeing these super parties out there. Clearly I'm just not cool or anti social, but I can't ski with more than 4 people, let alone 10 or more.
We decided if they wanted our slabby shoulder and 500 vertical foot run to alders they could have it, and planned to mosey back over. We ended up doing one run down Sunburst's southwest aspect and then a ridge run back to the car.

I wasn't going to ski Sunday, but we got a good report from Kruser who skied the Tin Can trees on Sunday, and 4-6 inches was forecasted to fall Saturday night through Sunday afternoon. Then Dan down in Kenai called and it was on. Josh joined us as well for a couple of laps. 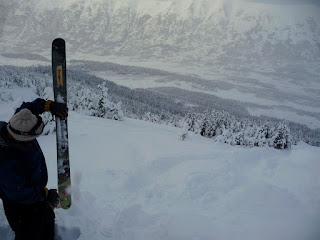 Kruser's report was accurate. The snow in the trees was good, and did not appear to get much attention the day before.
We found knee deep, light, high-quality turns, and snaked a few lines that have not been touched all season...or at least Dan and Josh did.
People are dumb, and it's great. We could see the lot was full, but no one seemed to be skiing the north side, and those who were did one-run-and-done: my favorite kind of skiers. 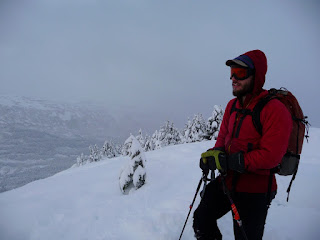