Thin cover was the name of the game this weekend.
Thin cover and mild temps let Ethan and I enjoy a 3-hour ride through the Los Anchorage hillside, Ethan on his snow bike and I on the Trance. The trails of Far North were by far the best for me, with a scant 1-2 inches, well packed down now by runners and riders.
Traction seemed to be a bit more scant compared to Thursday night. We debated whether this was a result of the warmed temps and a loosened snow pack, or just because now that we had daylight, we were actually trying to ride lines through the roots squggling our front tires and wasting forward momentum. At night, we just put our heads down and pedal through.
Ignorance is often a good thing.

Condition and stability reports from Turnagain have been depressing. A storm that was supposed to drop a few inches on the Kenai just dropped out and into the Gulf instead leaving us with trippy clouds and sun on Sunday. I met up with Jack and MW before the lazy yellow orb rose, and headed to the mecca of early season turners, booter builders, 1-run-and-done'rs and other likes: Tin Can.
We expected to make a single lap, scrape down the bases on rocks and tundra, and get out.
We were pleasantly surprised to find conditions much better than expected. That being said, Jack called it the thinnest conditions he has skied on Tin Can in 32 years.
Pay attention gunners of the deep, that says a lot...
It was reminiscent of skiing out of Pete's North in a poor snow year. Good snow up high; alders, roots, and ice on the way out; lurking rocks beneath almost every turn.

It's a good thing everyone's buying super fat skis these days, they sure must float over rocks a lot better.
I was grateful for my mono fat ski, and the fact that I don't care what happens to its base anymore.
We found plenty of geology and biology, but a fair number of good turns in between. 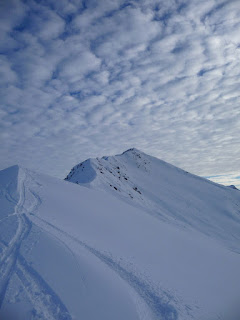 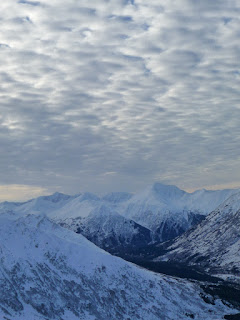 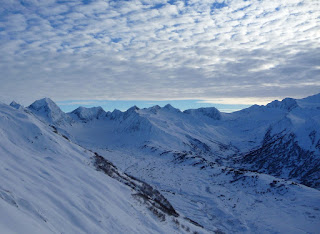 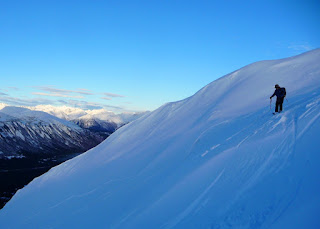