With no new precipitation, and only a thin snowpack on the ground, chasing winter pursuits is feeling more and more squeezed.
The holiday weekend was sunny, clear, cold, and relaxing, spent with a lot of good company, but I won’t be the first to say that winter is being a turkey up here this year.
Tired of skating around on my old rock skis, I’ve been doing laps on Sand Lake in South Anchorage regularly. One of the residents on the lake has been grooming the thin snow over thick ice, much to the benefit of skiers across town.
Anchorage is poorly endowed when it comes to thin snow years compared to the Central Kenai. While both the Tsalteshi and Anchorage trail systems need only a thin thin covering of snow to make them viable, the Cen Pen has hundreds of lakes, including Arc and Headquarters right in Soldotna that are groomed by TTA and the Refuge. In Kenai City, the golf course is groomed, and the grassy sub-surface means you can safely ski the fairways on even good skis so long as you avoid the cart paths.
Here in Anchorage, however, the pickings are more slim and a lot bonier when we don't have snow.
So be it. I enjoyed a long skate on Sand Lake on both Thanksgiving day and again on Sunday, partially in the company of another former Vermonter, and AK crust ski legend, Tim Kelley (LINK).
Additionally, the thin snow has made for continued good mountain biking, however, as the temperatures continue to drop, my limited cold weather riding gear has made it a challenge to keep warm, particularly my feet. I can safely say too that this is the latest in the season I have ever been regularly riding a mountain bike. Road bikes, sure I rode them well into November and even December, but this time of year back in Vt, riding a bike in the woods would be semi-suicidal between the deer hunting season and the freeze-thaw cycle tearing up the trails. I’m getting concerned at this point though about the minimum operating temps for my suspension and hydro brakes. Back when it was in the 20s and this clear and dry trend seemed to be just a phase I wasn’t worried, but now… who knows. 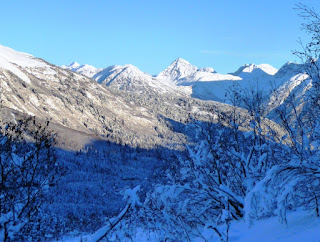 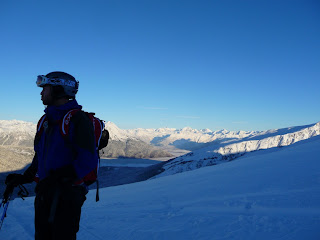 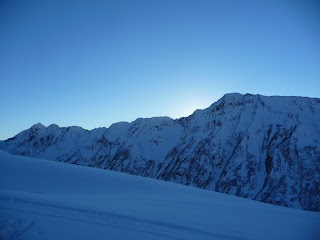 While the snowpack remains thin, it has consolidated well, and skis and boards come up on step almost instantly. A layer of surface hoar makes it easy to turn the heck out of the snow and rewards the rider's ears with a swishing noise as the delicate crystals shatter and join in the descent down the slope. 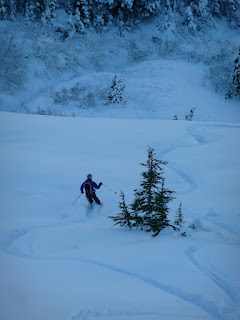 The highway was closed just south of Girdwood due to a tragic accident (LINK). As it turned out, the road remained closed for 5 hours in total. After we had been idling for about a half hour we were told by a stranger the wait could be 4-6 hours, so we turned south and drove 45 minutes to Dave and Sharon's cabin where they fed us and kept us company (read: tolerated our presence). It's good to have good friends all around.
Posted by Dante at 11:47 PM