Living with a couple intense cyclists in the last few years, one thing has been made clear, there is never one right way to feed and care for one's body.
Of course, don't tell them that.
While I don't even want to think how many productive hours have been lost in debate over what the best post ride snack is, how much water or food is needed per hour of riding, what the best energy food is, how much protein is need the night before a race, the list goes on and on and on and....., believe me, there's no end.
While these may sound like foolish points of discussion to most, and in fact, they are, a very similar subject of the same nature that gets discussed to no end by all, is how to best fight the common cold.
Go ahead, ask, everybody and their grandmother has the answer, and, "Trust me, it works like a charm."
The fact of the matter is, OJ, chicken noodle soup, sprite, or whatever the latest remedy is, is probably no better than some nyquil or sudaphed.
The bug is going to run its course, and if you're healthy it will probably move on pretty quick, otherwise it could stick around for a few days.
But don't tell someone prescibing their remedy to you that.
For a long time I swore by orange juice and vitamin-C tablets. Once the sniffles set in, I started drinking so much OJ I peed out citrus.
Ok not quite.
I also believe(d) that exercise was the best way to knock the snot out of a cold, literally.
I distinctly remember once, I think December of sophomore year of college, boarding through the first real storm of the year with a pretty good head cold. The snow was blowing in over Killington. Conditions were still really scratchy, but the red coats (ski patrol) were opening terrain up through the day.
I don't know if I was taking a personal day or if classes had ended, but regardless, my body was on the mountain while my head was higher than the low clouds clinging to the ridges.
I was in no condition to be bouncing through the wind and rain hardend moguls getting coated with fresh snow, but when the ropes lifted on a trail called the Flume, a narrow straight shot double black with no snow making, I dove in.
About halfway down, my cold caught up with me, and I sank my heelside edge into the crest of a mogul, sending me flat backwards downhill.
Catching a heelside edge is the worst edge to catch on a board. Incomparable for skiing, simply put, it's falling backwards downhill; it's just a recipe for bad.
The results were predictable, I whipped back and with a thud smacked my brain bucket clad head on a hard mogul below.
What happened next was less predictable.
As the force of the energy from the impact of my fall transferred from my helmet into my actual skull, the mucus membrane that had been clouding my head seemed to absorb most of that energy, and extricated itself out my nasal passage way skyward.
There's nothing like watching one's own flem jet out from their face at hurricane force, only to meet up with the forces of gravity and elasticity, sending them hurtling right back in a far less organized manner.
After clearing my goggles and face of the gooey mess, I regained my composure and found that I'd also regained my health.
The knock, and the day on the slopes, seemed to take it out of the cold.
So dude, next time you get sick, have some chicken noodle soup, a big tall glass of OJ, and go knock the snot out of you self somewhere...trust me, it works every time.*

*Or not.
Exercise didn't get me off the hook this time. Though I hoped a hard skate ski Monday night would clean me out, by Tuesday I found myself in pretty rough shape. It turned out a solid 10 hours of sleep Wednesday was the trick, or, maybe, just letting the bug run its course -- no, no that's crazy talk. 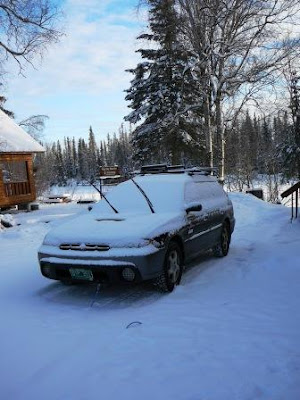 The Suby suffered this week as well. Tuesday, only a mile or two outside of Kenai on the way home, the crank wheel that drives the engine belts sheered off. Fortunately it was a quick fix and she was up and running by noon the next day, though her pain certainly added to my own stress.
Posted by Dante at 10:27 PM

I think that is easily your most disgusting post yet.