I seem to have contracted the latest runny nose scratchy throat bug jumping from one Alaskan to the next. My efforts to knock it out with an indoor bike ride, hot spicy soup and rocket a fast skate ski in 0 degree weather have failed, leaving me with one last option, trying to get some rest.
That being said, this will be a bit of a short post since I also forgot to take my camera backcountry boarding on Fresno Ridge in Summit Pass on Saturday. Summit is actually a closer powder mecca 20 minutes south of Turnagain. The change in scenery was welcomed, along with the blazing sun and perfectly clear skies. As hard as it may be to believe, having rolled up my sleeves on a few climbs, I believe the pigment of the skin in my arms may have darkened, if viewed in just the right light.
In lieu of backcountry photos I did have to go find some art for Monday's paper. In the process I ended up chasing a moose through the woods trying to get a good shot, risking having the beast turn on me and turn me into a front page story.
All to no avail however. 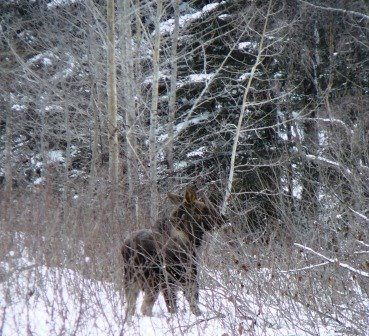 Karma strikes in many forms. After chasing this small moose in Nikiski on Sunday, I found myself in the opposite seat Monday evening on my ski when an ornery moose refused to move off the trail and I had to do a circuitous, unpleasant and potentially dangerous reroute. 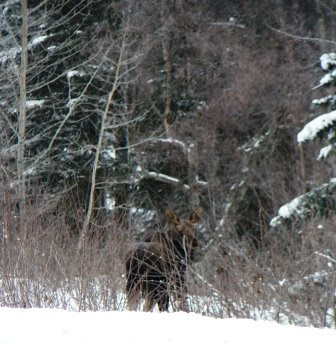 The camera shy moose proved to be useless as cover art.
I eventually did find some snowmobilers, and given that the 2,000 mile Iron Dog snowmobile race was taking off from Big Lake north of Anchorage at the same time, I felt it was appropriate. 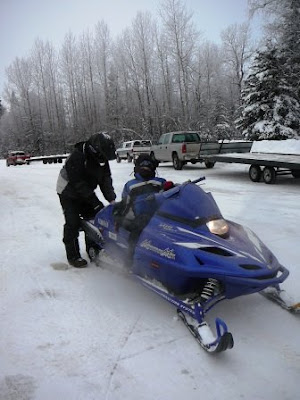 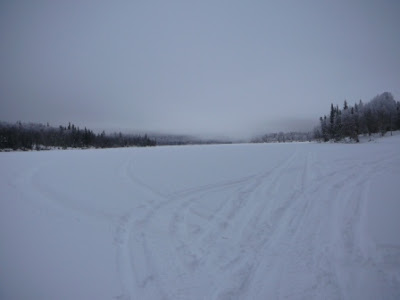 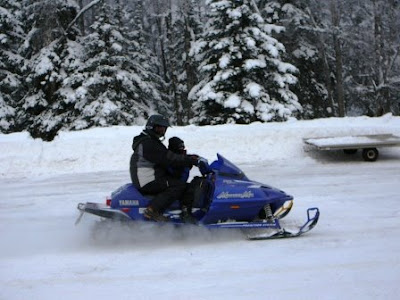 Monday evening on the way home another beautiful sunset unfolded across the inlet, and a whisp of clouds gave Mt. Redoubt the appearance that it was blowing off steam visible from 60 miles away. To my knowledge, though steam from melted ice and volcanic gas is being emitted from the peak, it is still not visible from this far away. I've added a link to my Critical Links section so followers can check the status of the volcano at the Alaska Volcano Observatory's website. an eruption is still expected in the coming days to weeks, and activity under the peak has continued to rise and fall in almost steady intervals. My fingers remain crossed it holds off or the winds favor us. 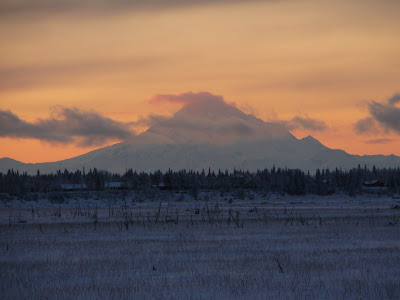 Mt Redoubt as seen from the Kenai Flats along Bridge Access Rd. just after 5:30 p.m. Monday. 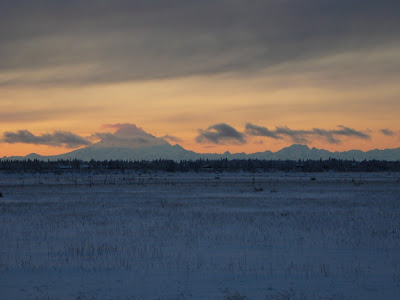