An assignment to do a story on Job Shadow Day for a local high school ended up sending me on an hour long flight to the remote west side of Cook Inlet on Tuesday while four lucky high school students practiced flying the plane.
I thought I'd just follow the kids as they toured the hangers and control tower at the Kenai Airport before catching back up with them after their flight, but Jim, the pilot they shadowed from Kenai Aviation invited Scott and I to go along with them.
I've been hoping to score a flight somewhere sometime while working this job, and man did I nail it. The pictures say it all, and temptation was to take hundreds more, but I also wanted to make sure I got a good look at the lonely corner of the world from only a few thousand feet above without the digital whitewash. 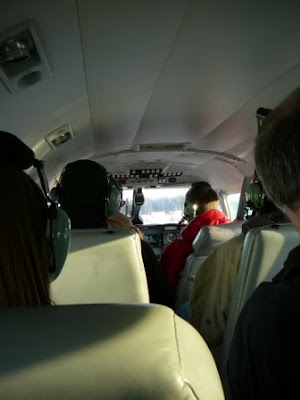 We flew in Kenai Aviation's comfortable Piper Navajo Chieftain. It's sort of like a minivan, with wings. KA uses the plane to fly crews and supplies out to the Drift River Oil Terminal at the mouth of the Drift River under Mt. Redoubt. 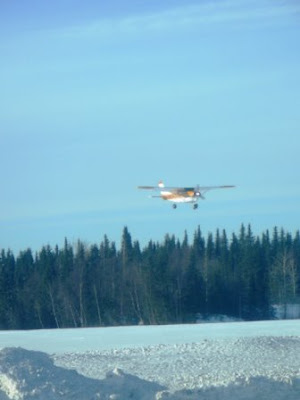 Waiting for the runway to clear 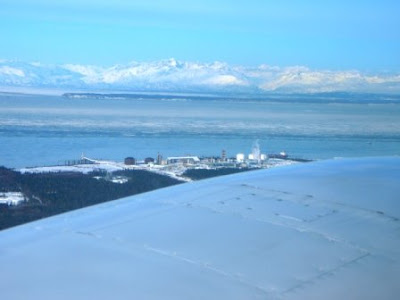 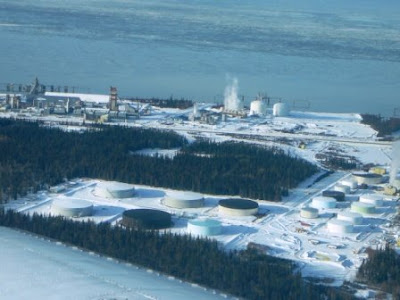 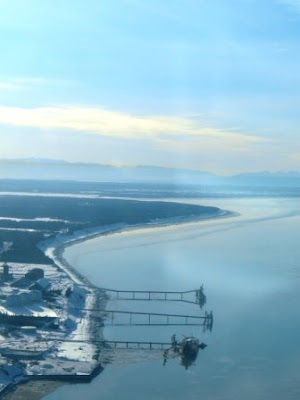 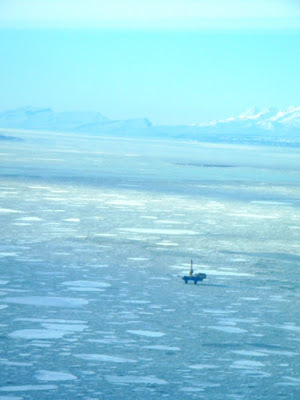 I've never actually seen an oil platform. I think in our flight I saw most of the ones set up in the inlet. (Click to enlarge) 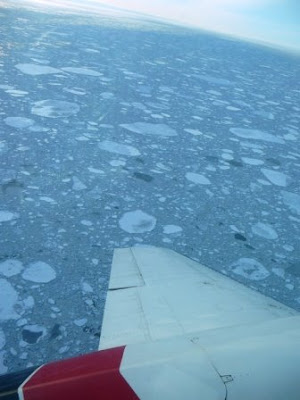 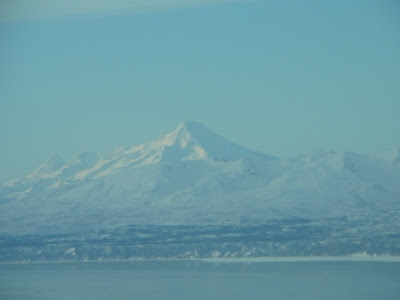 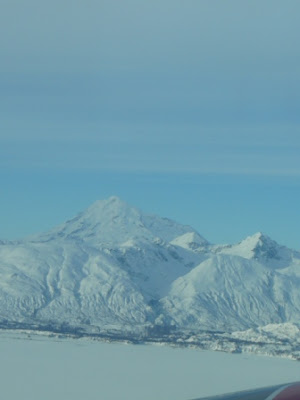 As close to Redoubt as we were allowed to get. Airspace over the peak (which showed visible steam from Kenai Thursday afternoon) is closed for AVO research flights working in the area and ash concerns. 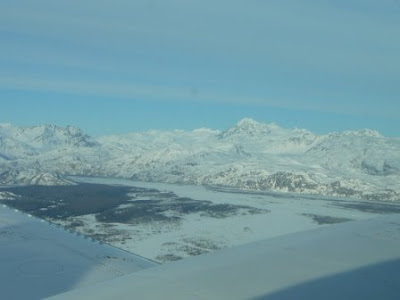 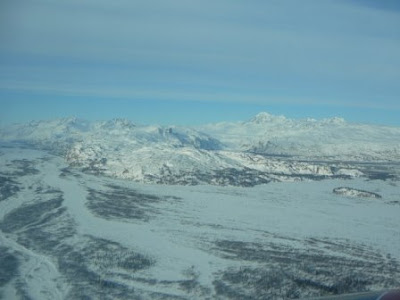 The mouth of the Drift River at the terminus of its mile wide valley. Imagine this being full of water from one side to the other, that's what will happen if Redoubt erupts and melts the Drift Glacier as it did in its last eruption series in 1989, making it briefly, the biggest river in the world in terms of volume. 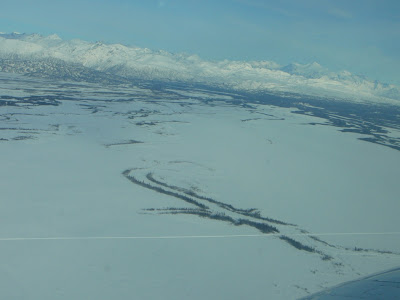 The fine white line in the snow is a pipeline leading to the Drift River Oil Terminal. Along with the terminal and a few wells, there is no other development or habitation on this side of the inlet. It's impressive to think about, but even more so to actually see. In the warmer months the great white flats are massive expanses of marsh, heavily populated by brown bears and largely impassable, so I'm told. (Click to enlarge) 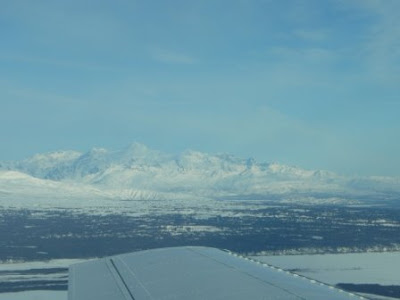 Mt. Spur
Seeing the other side of the inlet, a place I've only viewed on maps and in my imagination was a treat, but as we circled the inlet with Jim pointing out different peaks, oil developments and features, he noted that if looked far off into the distance we could see Denali.
I almost fell out of my seat.
I've never seen the continent's tallest peak, though I've long known that on clear winter days it's visible from different parts of the peninsula. Sure enough there it was, and even from 200 something miles away, through a plane window, its size was impressive. 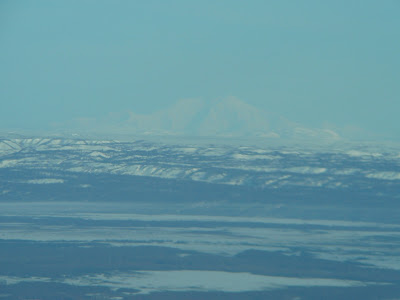 Here's the same shot, the lower has been touched up so the peak stands out more. In the washed digital view at full zoom, the massif doesn't look much more impressive than Mt Redoubt does from Soldotna. Realize however, that this peak is towering over 200 miles away, not 70. If you click either of the pictures, you'll notice what appear to be some foot hills in the foreground to Denali's right. Those foothills are the Talkeetna mountains I'm quite sure, and they top out at about the same elevation as Mt. Washington (over 6,000'). They're dwarfed by Denali and they're a good 100 miles closer!!! 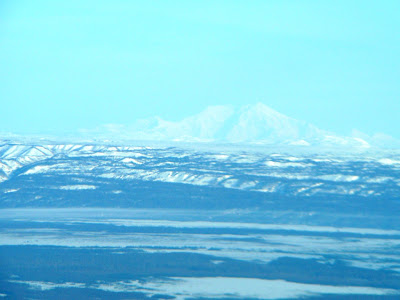 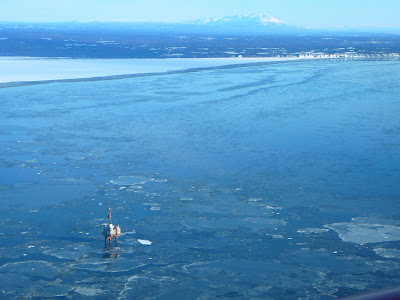 An inlet platform, with Sleeping Lady, or Mt Susitna, in the far distance. (Click to enlarge) 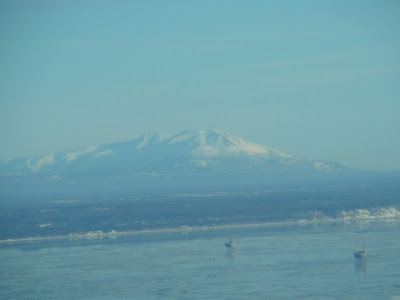 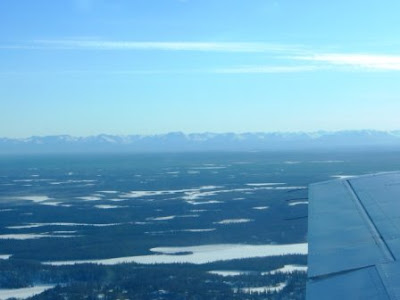 The Kenai Mountains to the east. 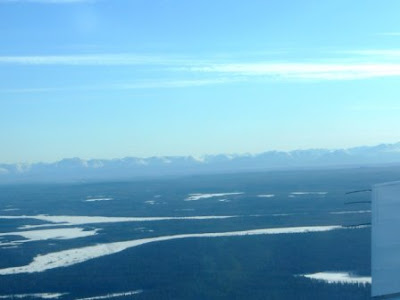 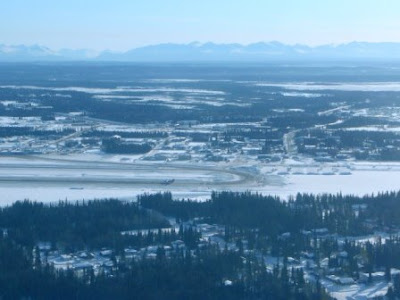 The Kenai Airport and Kenai. Click the lower image for a zoomed in view where I've circled my office. 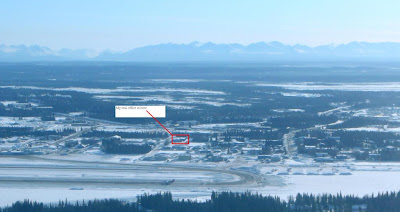 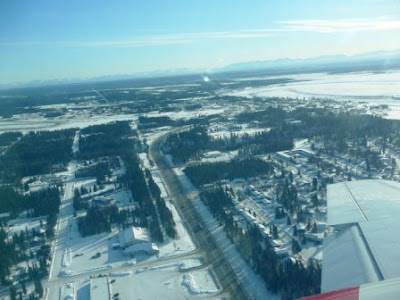 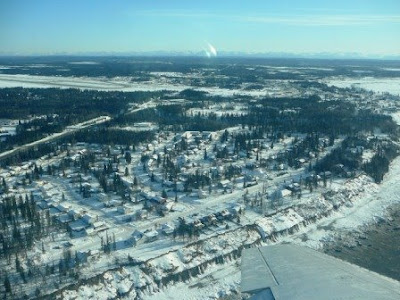 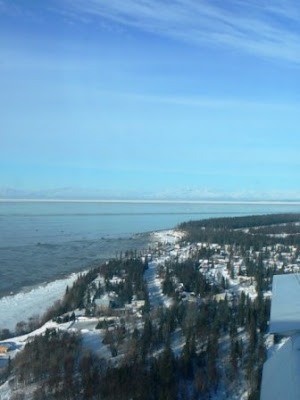 I could do this day everyday.
Posted by Dante at 10:13 PM