Back to back ski marathons

I'm looking ahead to back-to-back weekends of competitive pain on skinny skis these next two weeks.
After a season of being ridden by a few other skiers and colleagues -- though one skier in particular more so than all the rest -- about doing the Tour of Anchorage, I finally decided to give in last Tuesday.
The Tour is a 25k, 40k (25mi) or 50k cross country race held annually and participated in by thousands, that's overlapping point to point course takes skiers through the heart of the inner-city trail network.

Though I've been getting hammered with "youshoulddoits" since before I even clicked into skate skies early last November, I've kept coming up with excuses as to why I couldn't.
Most conveniently, the race is on a Sunday, so I had to get the day off.
Other reasonable excuses had to do with Anchorage being a relatively long drive away, not feeling confident in my own endurance, and feeling even less confident in my ability to ski in a crowd.
I also came up with plenty of compromises.
I committed myself to racing the Tour next year when I'm stronger, and hopefully a bit more experienced.
When that didn't deter the "youshoulddoits," I committed to at least skiing the Homer Ski Marathon the following weekend since it is closer, on a Saturday and not as popular among the masses, not to mention, gorgeous.
I had one fault in that latter plan.
As I learned last weekend skiing the Homer Marathon trail, the southern peninsula event is going to be by far, much harder.
The logic of my lame excuses started crumbling.
Then came last Tuesday night's community race.
I went head to head with Tom, a far more experienced skier off the gate that night.
He kicked my a$$, hard, lets be clear, but in doing so, my confidence surged.
I've got a lot of work to do on my form, but who cares, I could be 50 before my form reaches the point of perfection.
More important is that I want to race, I want to push myself and though yes, it could get nutty out there, I've got the cool when pressed against others.
I've been racing long enough and had my life put in jeopardy enough by bozo college racers who can't unclip from their pedals or steer around trees on their bicycles, to know how to keep my head in hectic race situations and ride them out.
In these long distance races, its about surviving, finishing, and being happy with how I rode, or now skied, than how I placed.
I've become exponentially more confident in my ability to ski with both people and terrain in these last few weeks, and while I'm by no means more than an enthusiast beginner in this sport, I'm ready to start pushing myself.
After skiing into what at least felt like a speedy second place finish last Tuesday, Tom, asked me and Keith, who came in not far behind me in third, if we were signed up for the tour.
Though for a second I hoped Keith would say no so that I'd have an ally, he said 'ya' and than the two looked at me.
I laughed, asked Keith if he had space in his car for one more or wanted to carpool.
And pretty much like that, a winter of excuses collapsed.
After fighting with the race's online registration system for the past couple of days, I finally locked in my place with at least 417 other competitors in the 40k freestyle race this afternoon.
The race starts at 10 a.m. Sunday. That sounds late enough, though with daylight savings time, the sun will have only had about two hours to start warming things up, and these days, while daytime temps have been more than comfortable in the mid to high 20's, lows have been dipping below zero. Fortunately Anchorage is milder than the cen-pen, but cold snow makes for poor gliding.
I'm registered to finish the race in 3 hours for seeding purposes.
I think I might be pushing it a bit. It took me 4 hours to ski 45k at the Tsalteshi on Friday afternoon and I was beat by the end of it.
Than again however, most the trails had an inch of dry ungroomed day old snow with a fair amount of debris mixxed in from a Wednesday night wind event. Additionally, I've been told the Tsalteshi is brutal when compared to the Tour.

A quick glance at the elevation profile for the Tour (bottom of the above map) reveals that much of the course is a gradual descent. I'll also have hard packed trails and hundreds of skiers to draft on, not to mention 5k less to ski.
If I can hit 3:15 I'll still be happy, and anything less than 3 hours will be a welcome surprise. 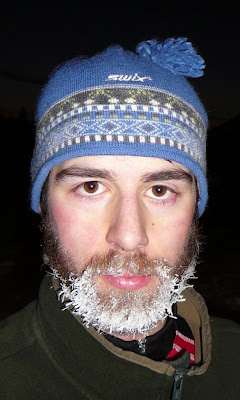 Temps dive bombed to at least -20 Monday morning, making it hard even for the much strengthened sun to get temps above the mid-teens by late afternoon. At the end of my Monday night ski they were at 10 and I was sporting a pretty solid, litteraly, frost beard ontop of my real beard, something I havn't seen in a couple weeks. I tried to smile, but it hurts when the ice starts to thicken up.
Posted by Dante at 9:32 PM