I'm torn right now as I try and decide how much suffering I'd like to endure this weekend.
Last weekend's 40K Tour of Anchorage was by no means a breeze, and though I had the snot beat out of me by some teenagers, boys and girls alike, the 25 miles went by fairly quickly and without much pain -- at least on Sunday -- Monday was a completely different story.
Now, as I prepare for my second weekend of marathoning, I'm facing a potentially far more difficult event.

The The blue marks the 25km course while the red shows the additional loops the 42km racers competing in the 2008 Kachemak Nordic Ski Club's Homer Marathon Ski. The race starts on the right side of the map (click to enlarge) in the Lookout Mountain trail system, connects with the Marathon Trail and travels west to the top of the Baycrest trails before descending to the finish.

The Kachemak Nordic Club's Homer Marathon Ski is divided into 2 races, a 42km (26mi) race, or a 25km (15.5mi).
Having skied the latter half of this weekends course earlier this winter, I know that the trail make longer climbs and descents while challenging skiers with a host of terrain challenges, including negotiating steep ravines, buried stumps, narrow sections of trail and less manicured snow.
The Marathon Trail, the 12km bread and butter of the point to point course linking the two smaller trail systems the course starts and ends at, borders on the line of a backcountry ski trail in all aspects, except that snowmobile groomers drag weighted steel sledges to pack and corduroy the snow. Otherwise its largely remote and and pits skiers used to wide fat bulldozed skate trails against an unforgiving landscape. 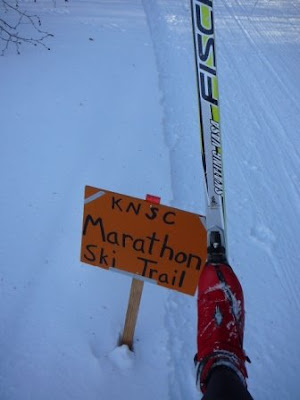 A shot taken along the marathon trail in February

It's not the Marathon Trail I'm worried about though. whether skiers chose to do the long or short race, they must still ski it, it's what come at either end of the Marathon Trail in the Lookout Mountain and Bay Crest Ski trail systems.
I've never skied the former, but looking at the course map it appears there's a fair amount of up and down. I'll be fine through that since its the beginning, but I'll be using up precious reserves fairly quickly.
I'll then hop on the draining winding Marathon Trail and make my way to Baycrest.
I've skied Baycrest, fortunately, I'll mostly be descending once I get there. The Baycrest trails are also wide, and generally well maintained too...except for the main descent of the 42k ski down a trail called Master Blaster.
I tried to ski MB in January on my classic wax based skis.
At the time the trail had been roll packed once, was covered in stump, bumpy as can be and steeeeeeep.
I turned around fairly quickly, being late in my ski, my legs didn't have it in them to make a hard descent.
I'm unquestionably a stronger skier now than I was then, but racer will hit MB somewhere around the 35k mark.
My body gave me notice at about 32-34k on Sunday in the Tour, and I'm quite confident that I'll get that notice sooner this weekend with a more challenging course.
MB, as it stands, is the biggest factor of the whole course nudging me to just do the 25k,
The shorter race makes a more direct descent on Awesome, while avoiding a long loop in the Lookout Mountain system. 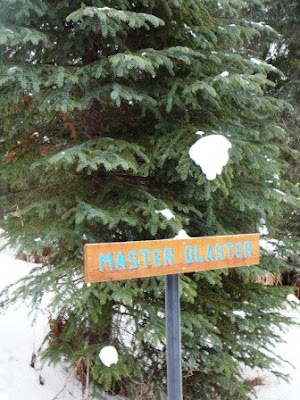 Which descent would you chose? 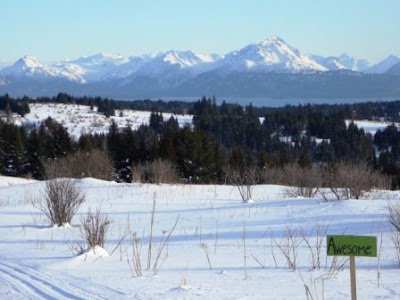 The way I see it now is that if I do the 42k event, I''ll be simply be testing my own endurance, with little concern about the rest of the skiers. If I ski the 25k event, while I'm certainly still too new to this sport to say that I'll be skiing competitively, I will in fact be focusing on speed and performance.
Since I'm doing day of registration, I haven't had to commit to one race. I'll likely make my decision sometime Friday.
Physically I feel fine for the race. After taking a pretty severe beating in the tour, I gave my legs Monday off.
Tuesday the crew met for the weekly community race. Keith and I went head to head battling each other and our own bodies painful resistance. Our legs announced their protest of the event by screaming through the whole 4k race.
A few times my shins told me to f-off and almost sent me sailing into the snow. While I only skied an easy 7k on top of that split as a warm up and cool down; the race itself was more than enough to jam my heart rate. For the record, I took first while Keith nearly clipped my tails 2 seconds behind. I believe this Tuesday could see a change in the usual line up between the two of us, particularly if my legs are shot.
Wednesday I spent the all day attending a special meeting conducted by the school board to interview and select a new district superintendent, giving my legs yet another rest.
This morning I hopped back on and skied a steady paced 11k in a more demanding 3-4" of fresh snow, being careful not to let the tip snagging snow send me face forward of tweak a joint.
I'll do something similar distance wise Friday, though hopefully the trails will have seen some grooming so I can focus more on a short bursts on flats to get everything fired up for Saturday.
Depending on how that all goes, and whether I carpool or drive myself, I'll decide if this will end up being a ski to beat as many other skiers as I can, or simply a ski I hope to live to tell about... 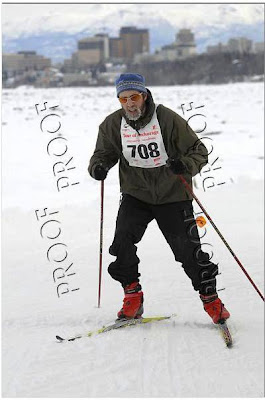 Here's a poached picture from last weekend. Told you, if I can't win, at least I can look pretty scary.
Posted by Dante at 9:10 PM

Your beard is epic.

What's the decision for this weekend?

I'm going up to the 'dacks for a little Haystack, Saddleback, Basin. It'll be my first hike for the year... shameful, I know.