It took more than 24 hours for by body to clean up after the endorphic blow out that was the 2009 Kachemak Nordic Ski Club’s Homer Marathon.
If you missed the weekend update on the Soldotnadomination of the 25k mens race, I placed fourth in the men’s 25km race.
The men's 25k was taken by Soldotna High Ski Coach Dan Harbison, second went to Alaska mountain running legend Bill Spencer from Anchorage and third to Tsalteshi trail groomer and the usual Tuesday night race leader Tom Seggerman.
I chased Tom in, trailing by two seconds to finish in 1:37:22. Harbison set the pace with a 1:32:12 finish. Forty-two people competed in the men's 25k, while the women's field boasted 31 starters.
This was one of those races I knew was going to go well pretty quick out of the gate, though I tried not think too much about it so I didn’t phsych myself out.
Temps, in the low 20’s, were a bit cooler than anticipated, though balmy compared to last weekend.
I chose to ski in a jersey and tights. As part of my warm-up, I made sure to overdress enough to turn the thermostat up so I would survive the standing around period before racer went off.
A wise idea, the organizer, though well intentioned, spent a little too long thanking all the people who helped put the race on while scantily clad racers started to shiver and shake.
With the handful of 42k racer out of the gate, the 25’s hopped into the troughs.
I jumped into the back of what was deemed the 25k male contingent of Team Tsalteshi, sitting behind Dan and Tom.
With the blast of a gun we were off. Dan pulled us down the track at a moderately fast pace, opening up once we got out onto the corduroy. 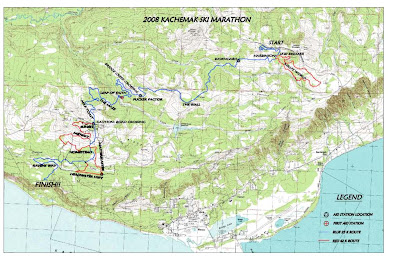 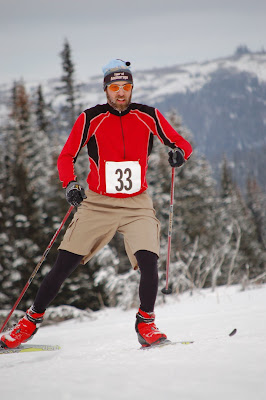 Nearing the crest of Dimond Ridge. Michael Armstrong, my colleague at the Clarion's sister paper the Homer News caught this shot from his home, which sits on the course near Dimond Ridge Rd.
Eventually I broke over the ridge, and firing across the road I found Tom downing a GU at the final aid station.
I grabbed a cup of water and Gatorade, dumped them both back, whacked Tom’s pole and said “let’s hit it.”
I took off down the mountain doing my best to keep on Tom’s tail through the bomber descent.
We were pushing alpine ski speeds, ripping around corners like I never thought possible on skinny skis. The highlights included taking a corner so sharp we skied through an impossibly low overhanging spruce limb that made a small tunnel over the trail, and catching some respectable air on the way out of a ravine crossing.
Tom pulled a bit ahead of me towards the bottom, but slowed up to let me catch back up and draft through the flats to the finish.
With Tom pulling, we were probably holding a steady pace of 25mph or faster on flat ground.
The final k’s of the race literally flew by.
One final short climb brought us up to the finish.
Though a sprint might have been fun, I have no question that Tom still would have taken me down, and if not would have been quite unfair since he’d already separated himself from me in the descent and then slowed to let me catch up and draft the rest of the way home. I was just lucky to be skiing into a fourth place finish a few split seconds behind third.
I left the notes: "Other placements, food, beautiful sun" at the end of this report on Sunday night, but I think the latter two speak for themselves as to what happened after the race. The bright equinox sun came out, temps rose into the comfortable upper 20's low 30's, the Tsalteshi crew loafed and cheered on the cen-pen women and Karl, the sole Team Tsalt skier competing in the 42k race, before heading into town for pizza and beer at Fat Olives. 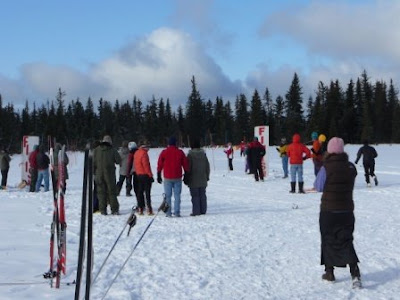 A few shots from the group gathered around a warm fire and baked goodies at the finish. Thanks for a great race KNSC 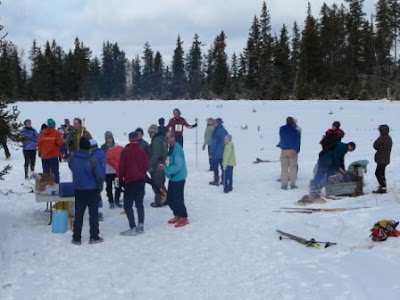 Great report, and congrats on the result. I think you'd go faster if you ditched the cargo shorts.

I agree, but than, I'd be sporting some serious moose's knuckle.

I think I speak for all of your fans, when I say that'd be OK.