Mt. Redoubt, the little volcano that huffed and puffed for almost two months, garnering the attention of the national media before finally quieting back down; blew her stack late Sunday night.
As of 9:30 Monday night it had gone off six times, though five eruptions occurred between 10:30 p.m. Sunday night and 5 a.m. Monday morning.
The lodge in Sterling and the rest of the Central Kenai Peninsula were unscathed by the ashfall from the eruptions, which are ongoing, thanks to a strong north to northwest wind.
The peak, just over 10,197 feet high, sits about 50 miles west of my office in Kenai.
Thick cloud cover kept the peak out of sight through the day.
A flyover of the peak conducted by scientists from the Alaska Volcano Observatory have brought back dim images from the peak but visibility was also limited.
While the peninsula has thus far been spared the wrath of volcanic ash fallout, communities north of the peak including those in the upper reaches of the Susitna Valley north of Anchorage saw thin layers no thicker than a penny is thin deposited.
When I stepped outside today to go to work, the air smelled slightly of sulfur, similar to what you might smell 50 feet away from a natural hot spring.
The gas is harmless, but indicates that the tail end of the ash cloud passed over the area and that very fine particulate matter might be present in the air.
An unrelated power outage across the cen-pen added to the tensions this morning, but life went on pretty much as normal otherwise.
Schools remained open, a few morning flights were canceled at the Kenai Municipal Airport and a few store reported increases in business as people rushed out for eruption related supplies or added them to their shopping lists.
Winds, which drive the direction of ash clouds, are favorable for the Kenai for the next few days, though fingers will remain crossed.
Scientists at AVO are predicting the volcano to have a similar eruption pattern to that seen when it last erupted 20 years ago.
In December of 1989 Redoubt roared back to life with a much shorter period of foreplay than what was seen in the past two months.
It continued to erupt until the spring of 1990, steaming for several months after that.
This is to say, that while we've avoided any ashfall so far, it could be days to weeks before this is all over.
Though unqualified to say, I would guess the eruptions could go on for far longer, but I certainly hope not.
In the discussions I've had with some of the knowledgeable folks over at the observatory, the ashfall the peninsula's seen in the past could be characterized as nothing more than a nuisance.
The ash coats everything, can be irritating to breath, is destructive to machinery and lousy for the snowpack, but otherwise little else.
Fallout, though expected in the peninsula, would not be expected to exceed a heavy dusting like that seen north of the peak this morning.
The magma ejected by the volcano, which is responsible for the ashclouds, is viscous and often described as syrup like in consistency as opposed to the oozing red rivers many people think of.
The magma creates volatile domes, but because of the topography in the crater, they easily collapse, preventing more catastrophic explosions like that seen on Mt St. Hellens.
As a result, more frequent small eruptions are seen.
Habitation on the west side of the inlet next to the volcano is non-existent, however an oil terminal is situated at the mouth of the Drift River, one of the main drainages for the peak.
Glacial melt in the '89-90 eruption flooded the river's entire mile wide valley, making it volume wise, the biggest river in North America for a few violent hours.
Anchorage news media is of course, besides itself in its woes and worries about the eruption.
Though the city is over 100 miles from Redoubt and likely to see an even finer dusting than the Kenai might, they continue to go pretty much nuts over it.
Joe said this morning that before he left the city to head back to the peninsula he saw a girl driving her car on the Seward highway wearing a particle mask.
At least the message is getting driven home
That's about all I can write for now. Monitor the Clarion and AVO for continued daily and hourly coverage.
If the peak does have a larger eruption or one that impacts significantly impacts the peninsula I'd ask that you please not call my cell phone as I may need it for work and my battery is junk.
You can always shoot me an email or check back here for updates.
I'll also tentatively scheduled to do an interview with C-FAX 1070 Radio in Victoria, B.C. at about 7:20 a.m. AKST. You can listen in live with streaming audio. 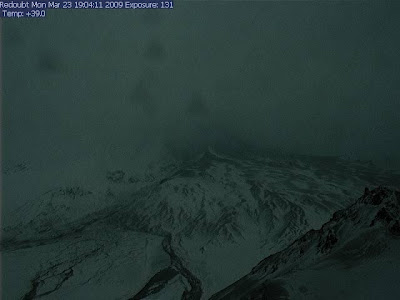 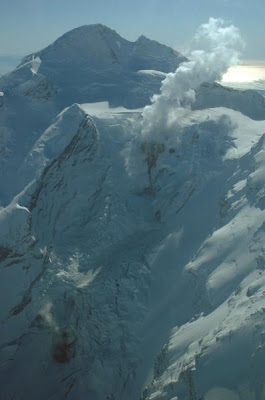