Despite there being a 10,000 foot volcano throwing ash 12 miles into the atmosphere only 60 miles from my front steps, another particulate has been falling out of the sky these past few weeks, one that's easier on the lungs and the mind.
Though I've been dealing with the volcano everyday, through my coverage of the volcano, trying my hand at eruption prediction just to make daily everyday decisions or losing sleep at what appears to be a general ineptitude (http://www.peninsulaclarion.com/stories/033109/new_283435387.shtml) on the state's part in handling the situation at the Drift River; life is managing to go on, even on the weekends.
After weeks of dodgy conditions in Turnagain and Summit Pass, the snow pack has started to recover from our hellacious January hurricane followed by a windy February, though avi concerns are still pretty high, especially now with ash mixxing in.
I'm also told that this is a bad snow year.
Obviously the folks that say things like this to me aren't gaining much traction.
There's a 112 inch base at the crest of Turnagain pass (1,000') as of Monday evening. Comparatively, back east, killington is advertising a 38 inch base one week after what is typically the climax of the eastern seaboard's maximum winter snowpack.
Don't forget either, that Killington offers one of the most extensive snowmaking operations on any mountain the world. Those 38" are anything but all natural.
I can say that I remember more than a few winters of old back east where the total season snow fall at 1,000 feet above sea level didn't make it much into the triple digits, let alone the compressed base.
This is all to say, that maybe things aren't phenomenal here this year, but I can't tell.

Since my life, and last two posts have been focused on the volcano, here's photos from March 20, 21, and 28.

I caught up with a few local cen-pen tele skiers two Friday's ago to hit my favorite hill in Turnagain, Lipps. 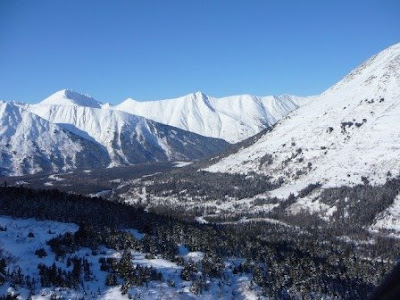 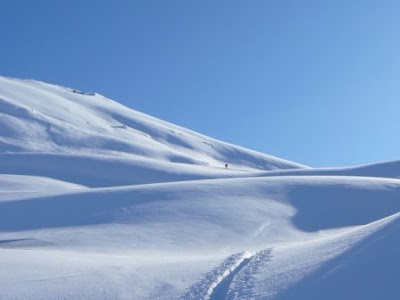 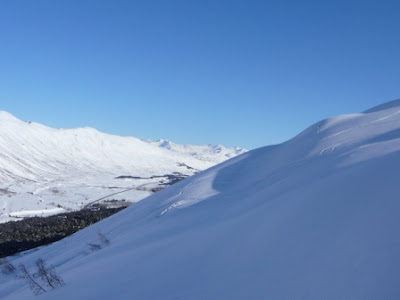 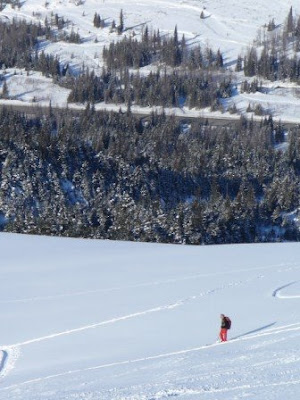 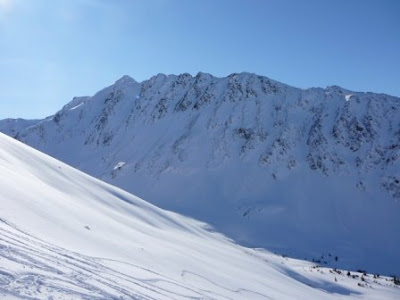 Here's two views of Pete's North, the mountain I skied the next day with Ethan and Josh, taken from Lipps. 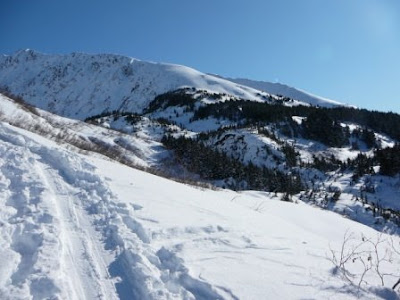 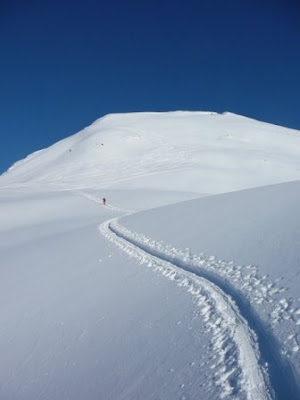 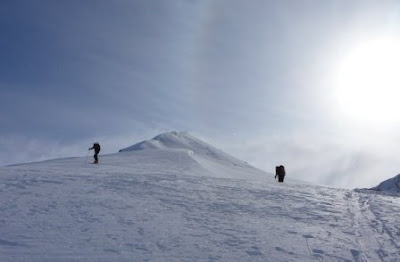 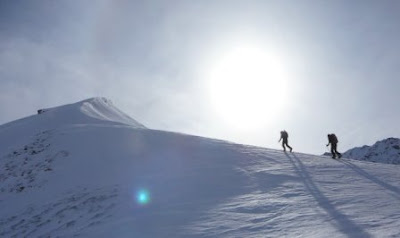 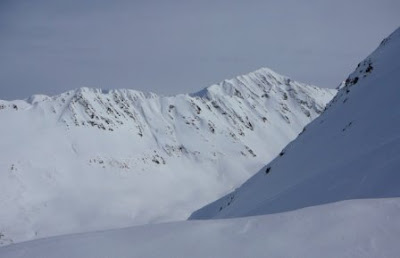 A view of Lipps from Pete's North 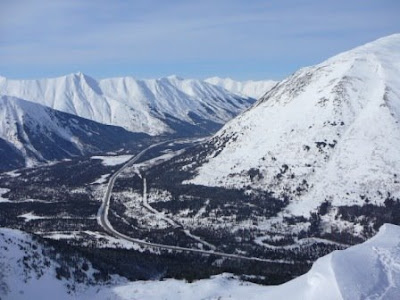 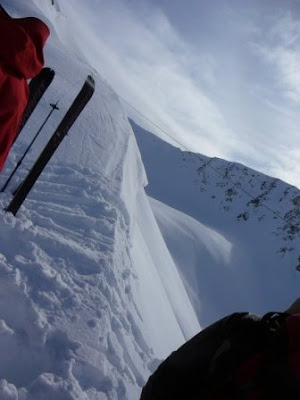 This is an awkward shot from an awkward situation. The thin black line stretching off the crest of this windlip is Ethan's P-cord we were going to use to try and cut off an over hanging wind lip. A well intentioned idea, but our anchor, the head of Ethan's shovel, became impaled in the crusty lip. For a few minutes it looked like that might be the last the shovel would be seen or heard of as no one wanted to go under the lip nor walk too far out on it to get some upward pressure. Eventually it did pop back out, I'll credit a guy who knows a thing or two about getting lures unsnagged off of rocky river bottoms with that feat, and we decided to forgo the avalanche exercise. 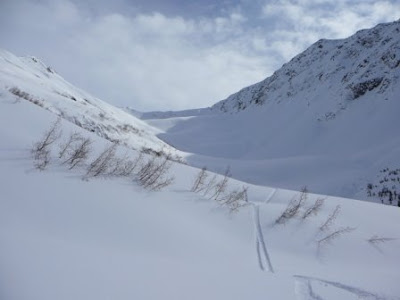 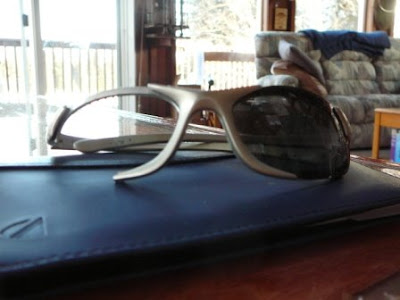 A costly weekend, I broke a toe strap on one of my bindings, but more importantly, ended this pair of sunglasses reign over my head and face. Sunglasses, unlike other pieces of gear, generally make it for every trip, whether its skate skiing after work (these were interchangeables so I wore them with clear lenses at night), everyday road rides, or epic unforgetable adventures on skis, boards, bikes, boots boats etc etc at any time of the year. They're the one piece of gear that's always there, for every season, for every sport, and they've seen almost every sight that I have.
I was actually really let down.
This was my second pair of Coyote Phantoms, and for the reasonable price of $40, they've survived an incredible amount of adventure and bashing around for the last two seasons. I had a pair before this one as well, but those were set atop a car and not removed before hitting the road one day.
Of course, a good thing never lasts, and Coyote no longer makes this model.
Saturday, March 28; "Pete's North," Turnagain Pass 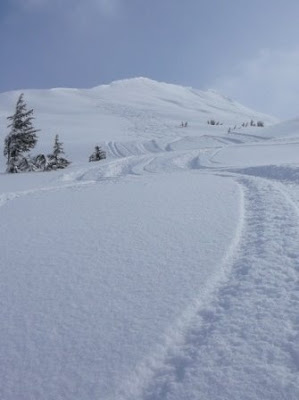 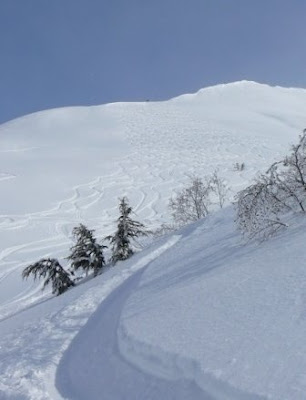 Powder conservation. Pete's North has a limited offering of skiable terrain, especially when avalanche concerns are as high as they were Saturday. Ethan, Josh and I split the mountain with another group of three, keeping our turns as tight to each other's as we could while still each getting a healthy serving of fluffy fresh. The tight pattern was visible from all the way back down at the trail head and we definitely maximized the number of runs we could all get out of the mountain. 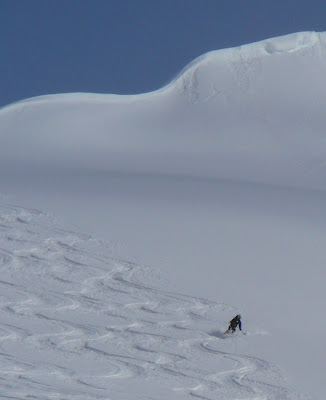 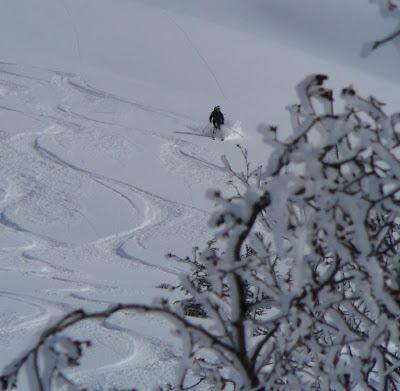 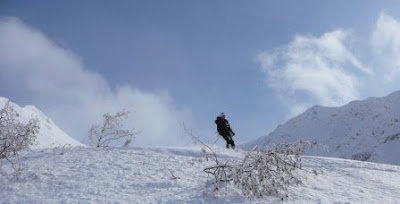 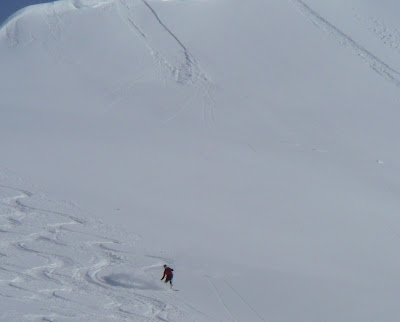 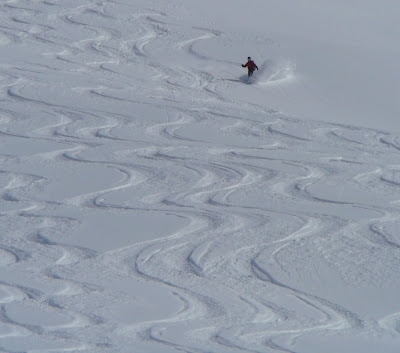 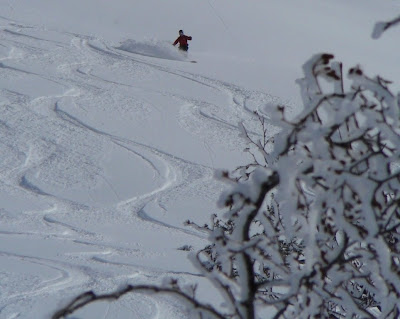 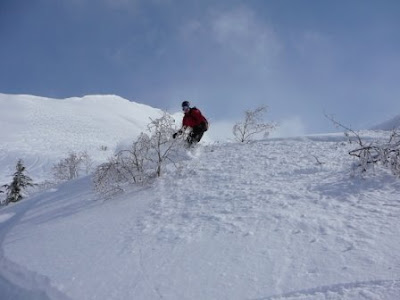 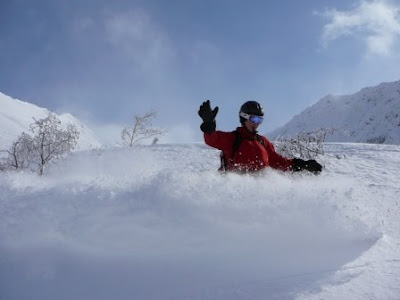 After getting slammed with a projectile snowbank, my lense got water on it, and picture taking was pretty much done with for the rest of the day. Worth it for this shot though. 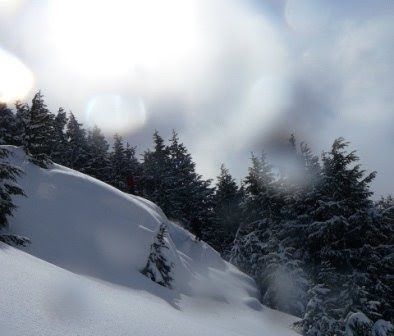 These two moments of glory were at least sort of captured as Josh (above) and Ethan hucked a small cliff. 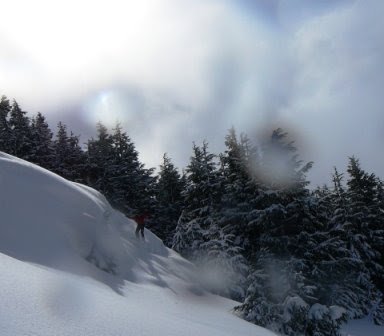