It's time to address an issue I've discussed with a couple other cold weather adventures that needs to get some exposure in the pubic, excuse me, public, spotlight. It's a very serious issue, but is really only a concern to one sex, that being, the male.
When the mercury drops, outdoor athletes have to layer up.
One layers very differently for a run than they do a hike though. Athletes are faced with the challenge of needing enough layers to cut the cold, but not so many that they overheat or begin to heavily perspire.
When I first stepped into this new world of skiing almost as much as I once cycled, I found that my old systems of layering were entirely irrelevant.
As a result, I may have done some serious damage on my first night ski back in October, when I fired off from the parking lot clad only in a jersey, tights, a hat and neoprene gloves, while temperatures hovered around 10 degrees.
My core temperature immediately began to drop, and though I tried to ski faster and harder, my finger tips grew increasingly numb.
Even after stopping twice to try and rewarm them, and then making a long heart busting climb, I found my extremities beginning to burn, with no sign of relief on the way.
I was forced to abort that ski out of fear of doing real damage, though since than my fingertips seem to be more prone to the cold than in the past and I believe I may have hurt them for the long term.
Back at the car that evening however, it was not only my fingertips that concerned me.
Another extremity, one generally less spoken of when it come to bundling up, was also complaining bitterly below that evening.
If you haven't caught my gist yet, this may not be your story.
Getting cold, and when I say cold - and lets be clear, I mean, painfully cold down there - is no laughing matter when you're standing in the middle of the woods with you hands in your pants hoping to god you and your appendage will make it out intact.
It's especially no laughing matter when you rewarm back in the car or lodge. I almost cried, I'm not joking.
I say all this, because, it turns out I'm not the only man to have made a mistake like this.
I'll leave names out, but after sharing my story, it turns out a few of the folks around here who participate in other cold weather sports have had similar experiences.
It's the kind of experience you don't need to go through more than once to learn a lesson from.
Just as you'll no sooner find me speeding around the trails at night one neoprene layer away from being naked at 10 degrees, you'll also probably find an extra wool sock in my ski bag when temps drop below zero.
The lone sock is referred to as a foxtail. The term comes from dog sledding. Foxtails are used to protect the male canine's appendage from frostbite when they run in temperatures way below zero.
Now you know. 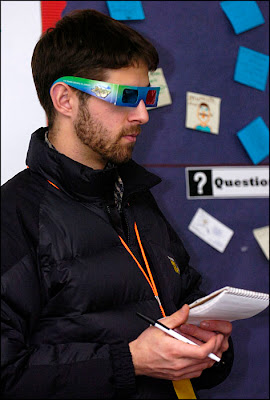 I'm also working on relieving the "cold jaw" I get on chilly nights by growing some facial insulation while sumultaneously making a fashion statement at local middle schools. Kenai Middle School knows how to hook their visitors up. On Wednesday I did a story on how teachers are taking advantage of Mt. Redoubt's antics. Scott couldn't resist snapping this picture.
Posted by Dante at 9:37 PM

I've experienced this phenomenon recently while riding, and can attest to the extreme pain upon re-warming. In short, I thought I was going to die, and I don't live in Alaska...

Of course, I'm not sure there's room for a ski sock in my bibs.

Not sure where to begin with this one. ... So how about a biology question I've never seen addressed anywhere else: How come when a man gets cold, his "extremity" goes soft and heads inside, yet his nipples go hard and strain for the sky? A contradiction, of sorts, says "M." Think about it.

An astute point by M. I'll leave my nipples to their skyward travels in the cold, at last check they serve little purpose. I could also make a similar comment about the extremity discussed in this story, but I'll refrain.